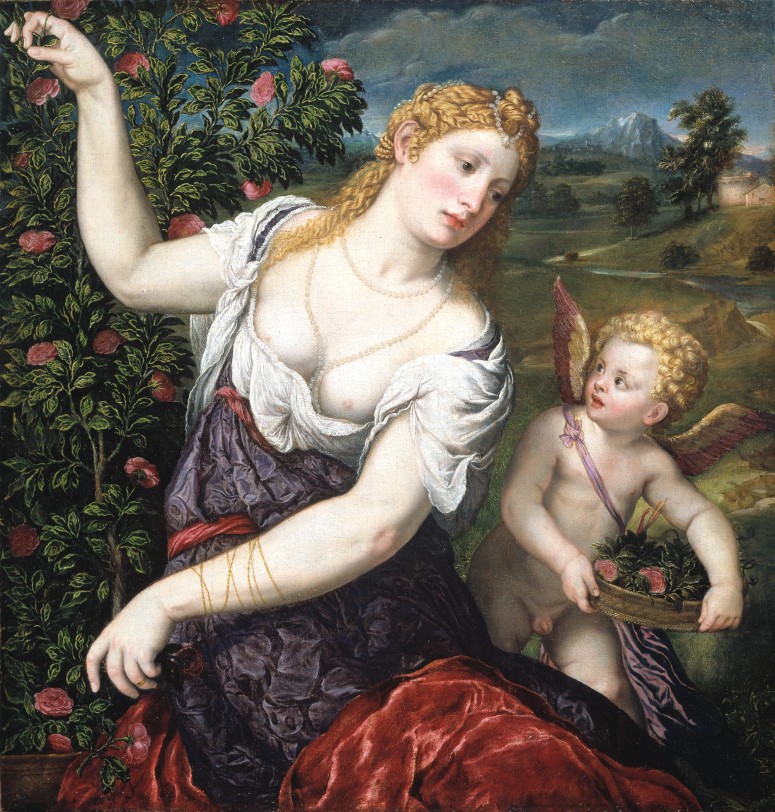 In a luxuriant landscape which is closed on the left by the curtain of a rose garden and on the back by the profile of a snow-capped mountain Venus is picking roses and putting them in the basket Cupid is holding. Her meditative and melancholic gaze lost in space seems to suggest a thorn prick and the thought that any love and kindness entails pain and concern as well.

The painting, a “poem” in the style of Giorgione made when Giorgione’s myth in Venice was progressively increasing, has been identified as an artwork by Paris Bordone. As also mentioned in ancient documents, originally the canvas continued on the right. Therefore the painting was rectangular, designed according to a genre – the painting for a bridal room – that in Venice, since Titian’s famous canvas Sacred and Profane Love painted for the marriage of Niccolò Aurelio and Laura Bagarotto, had often been enriched by the intellectual languor of mythological tales – and art historians interpreting the iconology of images have often analysed the importance of myth in Venice in the edifying representation of social harmony through the microcosm of a couple’s happiness, and also sexual happiness, and of family stability[i].

Our painting is known since 1570: in this year art merchant Willibald Imhoff registered a “large canvas in the room with Bacchus, Diana and Venus, painted in Venice by Paris Bordone” in the collections of his palace in Nuremberg[ii]. Imhoff was one of the richest citizens of the capital of Franconia, a tireless purchaser of mainly German and Venetian masters – a portrait of his made by Titian is conserved at the Statens Museum for Kunst in Copenaghen. Besides Bordon’s canvas and several paintings by Titian his collection contained paintings by Dürer (among which the splendid Deposition of Christ, today part of the collections of the Alte Pinakothek in Munich), Cranach and Holbein the Elder. His heirs dispersed the collection, and Bordon’s Venus arrived in France: as many as three public sales in Paris mention it between 1764 and 1768 (Le Brun, 19 June 1764; Largilliere, 14 January 1765, n. 53; M. de Merval, 9-17 May 1768, n. 5), and in the last one, at the Cabinet Madame de Merval, the canvas is pleasingly presented in the catalogue: “il serait difficile d’en trouver de ce Maître qui le surpasse en mérite”[iii]. In 1919 the painting was on the market in Zurich, then in the Sughardt collection in Wien and later, always in the Austrian capital, in the famous Miethke-Wawra gallery[iv]. After the Second World War the canvas was bought in New York by Walter P. Chrysler Jr., the tycoon of the car industry, and remained in his collection until his passing in 1988. Undoubtedly a first-rate collection history that does justice to the value of one of the artist’s greatest artworks until now never bought by museums (and Chrysler’s 1974 decision to display the canvas in his private museum in Norfolk, Virginia, is another confirmation of the collector’s admiration).

After Niels von Holst wrote in 1951 on the provenance of Bordon’s Venus from the Imhoff collection, since at the time the images of the painting were not available in the archives, Giovanna Mariani Canova stated in the monograph she wrote on the painter[v] that the canvas once in Nuremberg had to be identified with the one that in the first half of the 20th century was part of Achillito Chiesa’s collection in Milan[vi]. The image we have of this second painting, not yet on the market, actually presents a weak version of the subject, most likely a smaller ancient copy, where the figures are more curled up than in the master’s original canvas. Only when our painting was displayed in Norfolk the critics became fully aware that the prototype made by Bordon had finally been recovered[vii]: the very high linear and chromatic quality of the drapes attest to it, where Titian’s model has almost already merged with Tintoretto’s light impressions; Giorgione’s production attests to it in the landscape, which shows nonetheless the closeness to the painting of the Po valley of the mid 16th century – think of Dosso Dossi and Correggio; finally, also the tactile consistency of the rose garden on the left, which the Pre-Raphaelite Brotherhood would appreciated in the 19th century England, attests to it. Our attention focuses on the rose garden: the lines of the movement of Venus’ nude arm, whose shadows are sliding on its candour enhancing the eroticism, lead towards the union of the thumb and the index, true heart of the iconographic matter. According to Ovid, Venus’ blood will generate red roses – and in our painting the roses are significantly still pale – when brambles and bushes harmed the goddess when she was running to help dying Adonis. The blood of Adonis’ sacrifice will nurture the ground and, with Venus’ intervention, it will generate the anemone flower and the pomegranate – the association between the figure of the handsome young demigod and Jesus will be set on this pagan Eucharist.

Venus’ prick, in front of a worried Cupid, makes her reflect on transitory beauty, love and life as a whole. The melancholic gaze, recalling the gaze of the Virgin at the premonition of her son’s death, is the interpretative key of this poem written with a paintbrush, in the pure textual style of Giorgione. The harmony of nature and the gathering of roses are interrupted by the thorn prick, connecting – as Augusto Gentili properly stated in a famous essay on the myth of Venus in 17th Venetian century painting[viii] – the harmonic and musical time to the cynical time of history. And it seems that the goddess is perfectly aware of the passage from eternal spring to the unfolding and passing of the seasons. Besides, this subject has often been dealt in the essays on love during the 16h century and those lectures were certainly part of the cultural knowledge of Venetian aristocracy and therefore of the owners of commissioned paintings like ours[ix]. In a calm and crepuscular landscape, Bordon entrusts the concerns of Ovid’s metamorphoses to a simple magnetic gaze. And we are led to suspend our emotions to receive the sweetness of an amazing elegy.

[vi] Achillito Chiesa’s collection was sold in New York between 1925 and 1927 at the American Art Association. A copy was made of the painting previously attributed to Bordon, owned by the Argentinan collector, commented by Sylvie Béguin and attributed to the workshop of the Venetian master: S. Béguin, Paris Bordon en France, in Paris Bordon e il suo tempo, acts of the international congress of studies (1985), Treviso 1987, pp. 9-28 (p. 24, fig. 26).

[ix] Among the essays the Libro de Natura de Amore by Mario Equicola (1470 circa – 1525), one of the most published and read texts in Venice in the 16th century.