Madonna and Child with Two Angels: Tobias and the Angels, c. 1480 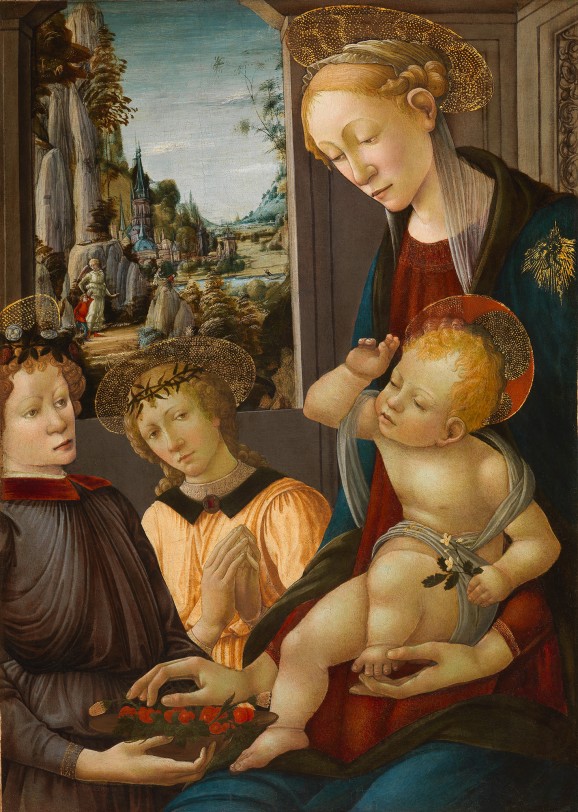 In a small, intimate space – with a large open window towards the back revealing a surreal landscape – the Virgin, with the Child on her lap, picks some cherries from a tray held by an angel; between them, another apteral angel prays, his gaze towards the viewer. A rocky landscape displaying a fabled city with high spears on a slope between a hill and a river is visible in the background with Tobias and the angel depicted at the near side of the mountain walking towards the city, along the riverbank.

Various themes are all skilfully intertwined in this beautiful panel displaying the models of XV century Florentine painting: firstly, the ‘Madonna of the Cherries’, alluding to the Passion and the Eucharistic sacrifice; secondly, the apterous angels, symbolizing the Christianity of its first centuries, hence the Church’s return to simplicity and purity; lastly, the journey of Tobias and Archangel Raphael to Ectabana, the Persian city represented by the vaguely Oriental domes and spears. The river alludes to the Tigris, and Tobias, urged by the angel, is about to grab the huge fish whose liver and heart he is supposed to collect – according to the Biblical story, these organs would cure the madness of Sarah, his future wife. The story of Tobias is a story of redemption from slavery – the condition in which the prophet was born – through bravery, and, as such, alluded to humanity’s slavery to, a theme that was particularly coherent with the religious and civil passions of a time that was already  acting as a prelude to the return of the spiritualism of the end of the century.

The provenance of our painting is not Florentine, but from Lucca; in 1966, Everett Fahy identified it as a work by the Stratonice Master[i], the conventional name later associated by Maurizia Tazartes to the artist Michele Ciampanti[ii]. The historiographical success of this panel can be explained by its peculiarities: the composition is drawn from Sandro Botticelli’s very famous painting of Our Lady of the Eucharist, previously in the Palazzo Chigi in Rome and today in the Isabella Stewart Gardner Museum in Boston. The painting had great success in Tuscany at the end of the XV century, and the masters of the time used it as a model, copying it throughout the first quarter of the following century[iii]. Secondly, our panel’s collection history is impressive: at the beginning of the XX century, it was in the collection of the Parisian antique dealer Georges Joseph Demotte (1877 – 1923) and of Michel Van Gelder (1864 – 1929) in Uccle, near Brussels[iv], and many years later it returned to Italy, on the occasion of a 1989 sale[v]. Lastly, and this is the most important aspect, it is a sumptuous work, attesting to the value of Botticelli and Filippino Lippi’s figurative tradition and its influence outside of Florence and, particularly, in the centers of western Tuscany.

As previously stated, Fahy identified the author of this painting: the so-called Stratonice Master, who has been known to scholars since 1931. It was in this year that Bernard Berenson – in one of his famous contributions to the series Homeless Paintings – analysed two works with Stories of Antiochus and Stratonice, painted for the sides of a ‘cassone’ that is today part of the art collection of the Huntington Library in Los Angeles, and isolated a stylistic group of seven paintings, all datable, he believed, to 1475 - 1490[vi]. It was Berenson’s belief that this group was painted by a Sienese artist: a pupil of Matteo di Giovanni, later influenced by Botticelli and Filippino Lippi, a painter who concluded his career before assimilating the style of Perugino and Luca Signorelli. Raymond Van Marle supported the putative Sienese origin of this master[vii], while Federico Zeri, less convinced, refers to a ‘Sienese, Florentine or Tuscan’ painter[viii]. Fahy’s contributions cleared the doubts on the provenance of this author[ix] as he identified typical Lucchese features and divided the painter’s activity, to which various paintings had been added, into three phases. In the first, the Stratonice Master was influenced by Sienese painters, especially Francesco di Giorgio; in the second, he formed contact with Florentine painters, amongst all Botticelli; in the third phase, his adhesion to Lucchese painting became more visible, becoming the decisive aspect that identifies his city of provenance. The discovery of the documents referring to the triptych depcting the Madonna and Child with Four Saints of the Church of Montignoso near Massa, previously assigned to the Stratonice Master[x], allowed Maurizia Tazartes[xi] to finally collect the artist’s oeuvre under the name of Michele Ciampanti, a Lucchese painter and citizen active between circa 1470 and 1510. His identification allowed Riccardo Massagli to finally define not only the oeuvre of Michele Ciampanti, but also the catalogue of his son Ansano, previously known as the Master of San Filippo, who successfully ran the father’s workshop[xii].

Fahy dated our panel to around 1480, when, according to the scholar’s opinion, Ciampanti – or the Stratonice Master – was most influenced by Florentine models. Luciano Bellosi supported this date[xiii] by comparing our Madonna to a Saint Sebastian, painted a few years earlier (known through an image now in the photographic archive of Villa I Tatti in Fiesole). It was his opinion that this was the first example of the painter’s production under the influence of Botticelli’s style seen in Botticelli’s Saint Sebastian, previously on a pillar of the church of Santa Maria Maggiore in Florence and today in the Gemäldegalerie in Berlin. On the contrary, Massagli dated our painting to the second half of the 1470s, when Ciampanti was shifting from the style of Liberale da Verona and Francesco di Giorgio to more purely Florentine models[xiv], that is, slightly after the Adoration of the pastors now in the Galleria di Palazzo Cini in Venice[xv]. Lastly, Gigetta Dalli Regoli[xvi] identifies our painting, the aforementioned Saint Sebastian and an Annunciation in the church of San Giovannino dei Cavalieri in Florence – Zeri attributed to our artist – as the result of Ciampanti’s remaining in Florence from 1475.

Due to the lack of documentary evidence, it is not possible to organize these works in an ad annum order, especially since our painter was so open to the influence of his models. Nonetheless, it is clear that Fahy’s slightly later dating, around 1480, is the most likely. In the works dating to the 1470s, the influence of Liberale da Verona, and more generally of Sienese painters, is still quite tangible, while in our painting this influence is less visible. By comparing the profile of the Virgin of our panel with the one of the Annunciation of the church of the Cavalieri, influenced by Lippi (its model is Fra Filippo’s Annunciation, today in the Alte Pinakothek in Munich), the line progressively becomes smoother and more winding, similar to the style of Botticelli, therefore setting aside the expressive patterns of his initial career drawn from the figurative experience of Liberale. Furthermore, amongst the models of our painter we have to insert Filippino, an independent and autonomous artist since 1475, referenced in our painting in the figures of the angels; he would soon become our master’s main model –the figures of the Virgin and the angels can be compared with the same figures of the Holy Conversation, previously in the Samuel H. Kress collection and today in the Museum of Art in
Birmingham (Alabama)[xvii].

A final observation on the beautiful landscape: in the window behind the angel of the Madonna of the Eucharistic in Boston, Botticelli inserted a smooth hill depicting a religious foundation of a tall bell tower and a partially dried lake. It represented a reassuring landscape, recalling the Tuscan hills: an element of temperamental moderation, far from any expressionism. The rocky landscape with the imaginative city of Ectabana beyond the river has an entirely different nature: the spears simulate crystals and the plants are touches of gold. The fabled impression recalls the Late Gothic, in particular the Flemish works – as Massagli observed – that were quite common in Lucca. The landscape reveals a narrative – the figures of Tobias and the angel are presented twice – while also being decorative, unusual and entirely different from the nature of the figures on the foreground. Such formal and poetical inconsistency represents one of the reasons for the fascination of this remarkable works.

[iv] Berenson states another passage in the B. Guinness collection of a certain Schloss Merchlingen in Lower Saxony. Not knowing this collection, the scholar’s observation cannot be verified: B. Berenson, Italian pictures of the Renaissance. A list of the principal artists and their works, III, Central Italian and North Italian schools, I, London 1968, p. 256.

Documented in Lucca beginning in 1463, he is one of the most active and appreciated masters in the city and its environs for a very long time, from the second half of the XV century to the first decade of the following century. The re-discovery of the commission to paint the altarpiece - previouosly attributed to the anonymous artist, the ‘Stratonice Master’ - of the church of San Vito in Montignoso, not far from Massa, allowed Maurizia Tazartes to connect the name of Ciampanti to the oeuvre assigned to this master, whose works had increased in number thanks to the scholars’ interest. Bernard Berenson, who had gathered a small stylistic group from the two panels of ‘cassoni’ with the Stories of Antiochus and Stratonice, preserved at the Huntington Library in Los Angeles, isolated the personality of the Stratonice Master: it was Berenson’s belief that the anonymous painter was a Sienese influenced by Francesco di Giorgio Martini and later Filippino Lippi. Everett Fahy identified the Lucchese provenance of the master and organized his activity in three precise moments, the last of them displaying the influence of styles close to Vincenzo Frediani and the sculptor Matteo Civitali. Lucca was an important artistic destination in Tuscany, as shown by the presence of works by the greatest Florentine and Sienese masters, mostly produced in the city throughout the XV century; this allowed Ciampanti to count on various models, as tangible in the works of his early activity. In 1474, he moved to Florence where he stayed for a long period, and studied in person the masterpieces of Botticelli and Filippino Lippi, and was also involved in important paintings commissioned by the city’s religious institutions.