Master of the Madonne Del Latte 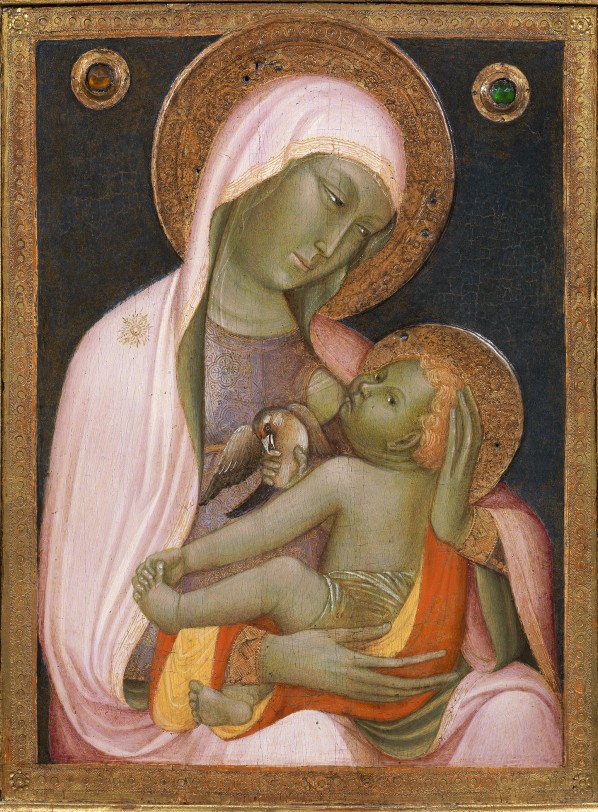 Wrapped in a wide orange cloak with a green cuff and a hem decorated in gold, the Virgin is gently holding the Child. His mouth is reaching out to his mother’s breast, while he is holding in his right hand a goldfinch ready to spread its wings and try to elude the grasp.

As we can see the iconography of the Madonna del Latte and of the goldfinch, at that time a less known symbol of the Passion of Christ, come together in this precious panel that on the one hand is still permeated with the style of Giotto and on the other welcomes the linear suggestions of the International Gothic style; according to a known legend of the Middle Ages a chaffinch, a robin and a goldfinch tried to lift the crown of thorns with their beaks in order to ease the pain of the Saviour and from the scratches their chest would have become red[i]; also the Latin origin of the word “goldfinch” is known: carduelis, which according to Plinius (Historia Naturalis, X, 42) derived from the bird’s habit of eating the seeds of the cardoon – and this flower becomes itself a symbol of the Passion. The image of the Child tightly holding the premonition of his future alludes to the mystery of the Redeemer's humanity, almost as if he were grasping with his hand his elusive and ineffable nature to offer it to the observers with a very empathic gaze rich of emotion. On the back of the panel a seal shows the image of the Savoyard Crown (the coat of arms of the Kingdom of Italy until 1870) and the inscription of the Academy of Fine Arts of Venice: this means that our painting must have been part of the collections of the Gallery of the Academy during the second half of the 19th century; we find it later in the collection of Florentine Art dealer Paolo Paolini who includes it in the 1924 sale of his paintings and sculptures in New York (at the American Art Association). In the sales catalogue Raimond Van Marle – who sees a similarity with the figure of the Virgin and the one of the Madonna previously in the monastery of Saint Francis in Asciano, today part of the collections of the Museum of Holy Art[ii] – assigns the panel to Barna da Siena, hence dating it within the first half of the 14th century[iii]. Federico Zeri disagrees with this attribution and inserts the image of the painting in the dossier of the 14th century Anonimous from Marche[iv]. The attribution to the anonymous Master of the Madonne del Latte, a painter from Padua who lived between the end of the 14th and the beginning of the 15th century, is as recent as the denomination of this stylistic group by Andrea De Marchi[v]. The panel has been compared with the Madonna del Latte previously part of a Milanese private collection and later part of Marco Grassi’s gallery in New York; Francesco Arcangeli brought this second painting to the critics’ attention as a panel by Tomaso da Modena[vi]. 52 years after it was published on “Paragone” and it is very interesting to read a passage of the contribution of the great Bolognese historian and realize that, despite the clear attributive mistake, his description was actually really suitable and fully coherent also to our painting: “Look at the Child, and note how the holy subject has been considered with his calm daring confidence. In comparison the most daring winking of the children of Ambrogio Lorenzetti are drawn, “humanistic”, while in our case the previous versions of the whole expressionism of the Middle Ages calm down to obtain a fat lymphatic tenderness of a just sketched slow wiggling movement: soft flesh, milk, sweet blood, and the courage to depict Infant Jesus moving with almost automatic movements, and almost showing animal facial expressions: a hand holding the small unruly bird, the other maybe distracted by an itch to a toe, the mouth eagerly suckling, and his eyes wide open towards us, almost as if he wanted to make sure we have noticed him”[vii].

It seems that through this fluid and elegant passage Arcangeli wants to lead our gaze along the lines that contour this amazing panel. Our painting not only certainly features the highest graphic quality of the other four panels that Andrea De Marchi includes in the stylistic group of the Master of the Madonne del Latte – besides our panel and the one analysed by Arcangeli there is another Madonna del Latte part of the collections of the Musei Civici in Padua and a Madonna of Humility influenced by the models of Gentile da Fabriano – but also the most precious gold and the most precise and fine punching. The presence of coloured vitreous pastes in the upper corners – in origin other pastes were mounted to decorate the halos – and the splendour of the gold – which has been generously applied non only on the halos and on the hems of the garments, but also (and in large quantity) on the cuffs of the Virgin’s dress made with the simple application and finishing of the foil – prove that it is the most refined panel of the group. Furthermore, since the three Madonne del Latte studied by De Marchi were painted on the same model, the infrared analysis showed underneath the painted layer of our panel that this model is actually the original drawing. Two pentimenti are visible, the first on the thumb of the Child’s right hand – according to the first drawing it had to be closer to the chest of the goldfinch – and the second on the upper profile of the left hand, slightly raised. These small alterations attest to the author’s reconsiderations and would not make sense if this painting were made based on a previous model.

Therefore our painting is the prototype of a composition that has been repeated many times, most likely by the master himself or one of his close collaborators; two panels which De Marchi has insert in the group attest to this production: the painting previously part of Grassi’s collection – and Fulvio Zuliani[viii] and later Robert Gibbs[ix] have already contested its attribution to Tomaso da Modena – and the panel today part of the collections of the Musei degli Eremitani in Padua, at first attributed to an anonymous painter from Ferrara[x] or a master from Venice not far from Catarino[xi]. In his formal analysis De Marchi begins with the mistake of Van Marle who believed the panel to be a painting by an artist from Siena: the iconography of the Child with his arms and legs crossed near this mother’s womb alludes to the Crucifixion and has been previously represented near Siena and in Liguria, but these paintings have not been connected with the activity of the masters of the first half of the century (as Van Marle believed having attributed the painting to Barna), but rather of Taddeo di Bartolo, a painter active in Siena and since the 1380s in Liguria. We know that at the beginning of the 1390s Taddeo had been working in Padua for Francesco II da Carrara, clearly influenced by the style of the frescoes of Altichiero at Saint George’s Oratory. It is easy to think that the paintings the master from Siena had left in the city inspired in turn the Venetian painters and were behind the development of new iconographies, unusual in the region, such as the one of our painting developed. In the pink and orange tones, made with the finesse of the passages of colour and light typical of the Po valley, De Marchi saw the style of Tomaso da Modena (hence returning to Arcangeli’s hypothesis of attribution) and his collaborators from Treviso (among which the Master of Feltre stands out). Yet our master was certainly not unaware of Giusto de’ Menabuoi and Altichiero’s masterpieces in Pauda, as it seems that he had been inspired by the chiaroscuro variations of the drapes and by the research of a slim and sculptural shape.

In other words, our panel is the end and contact point of some of the best figurative traditions of the Italian 14th century. The musical lightness of the line that almost welcomes the arts of Gentile and Stefano da Verona identifies a formal firmness that actually echoes Giotto; the author's admiration for the colours of Tomaso mergers with suggestions that through Taddeo di Bartolo echo the Sienese school. All of these influences result in a true masterpiece of Italian, a panel that is significantly ending the century and ready to pass on its features to a new civilization on the rise.

[ix] The painting is not part of the painter’s catalogue. R. Gibbs, Tomaso da Modena. Painting in Emilia and the March of Treviso 1340-80, Cambridge 1989