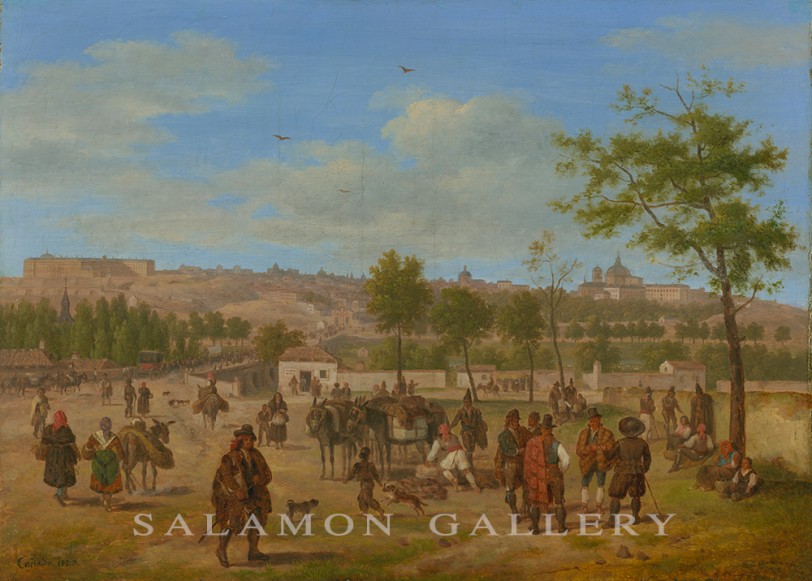 The ancient citadel on the Los Austrias hill in Madrid is depicted from a low point of view, beyond the Manzanarre; this area, which today corresponds to the wide Paseo de Extremadura boulevard, was at the beginning of the 19th century still largely covered with grazing land. The outlines of the Palacio Real – built on the former Real Alcázar – and the church of San Francisco el Grande define the Northern and Southern limit of the hill on which the Arabs had built in the 9th century the city-fortress. These two buildings hold an important symbolic meaning for the city: the Palacio Real is the official residence of the Spanish monarchy, and the church of San Francisco el Grande was the Franciscan foundation that greatly interested the Bourbons for dynastic reasons as they intended to make it the holy resting place of the Kings of Spain.

The establishment of the Bourbon monarchy at the beginning of the 18th century had led to a policy of great building renovation in Madrid, and this fervour attracted in Spain many great architects from Italy and France. Filippo Juvarra was appointed to design the renovation of the Palacio Real (the wood structure of the ancient palace had suffered a violent fire in 1734) and his pupils, Giovanni Battista Sacchetti and Francesco Sabatini, completed its construction in the mid 1760s. In those same years, the renovation of the Royal Basilica of San Francesco was completed in 1784 with the dome raised into place. In Antonio Joli’s famous view The Palacio Real seen from the Manzanares (Naples, Royal Palace) painted around 1750, we can clearly see that the palace is almost completed while there is still no sign of the church[i]. Besides, since the end of the 17th century the hill on the other side of the Segovia bridge had become the favourite point of observation for the landscape painters who wanted to depict the ancient city; through their canvases, today mainly part of the collections of the Museo de Historia in Madrid, we can see the progressive development of the monumental foundations. In our canvas, dated 1823, we are at the end of this building fervour. The city was already about to include the surrounding rural areas, and the painter’s gaze lingers on the citadel to underline a continuity with the tradition of the landscape painters of the 18th century.

The canvas is signed by Veronese artist Giuseppe Canella: one of the most interesting landscape painter of the first 19th century, also active as set designer and architect[ii]. Reading through the manuscript autobiography – a document that has been conserved until a few years ago in the Biblioteca d’arte of the Sforza Castle in Milan[iii] – we can trace the sequence of his journeys that made him became one of the most well-known Italian landscape painters: he started out in Mantua and Venice, in contact with the masterpieces of the Renaissance and Canaletto and Guardi’s famous views[iv]. In 1820 he left Venice for Spain, and three years later Paris, where the duke of Orléans (the future Luis Philippe King of France) bought his paintings exhibited in the Salons. In 1832, while still travelling throughout Europe, he decided to live in Milan: these are the years of the institutional positions at the Brera Academy – already at a younger age he had presented views to the Academy with a unanimous approval – and of the successful exhibitions of his landscape paintings in Wien and Berlin. Canella died in Florence, during one of his frequent journeys, in 1847 at 59.

Modern critique has undoubtedly dedicated its attention mainly to the artist’s landscapes, yet at his time views were Canella’s most appreciated paintings: in fact, thanks to 19th century bequests many views of Madrid, Paris, Rouen and Milan have entered the collections of some of Europe’s most important museums; a painting on copper, with a symmetrical point of view of our canvas, is today part of the collections of the Museo de Historia in Madrid, and also the famous Musée Carnevalet in Paris hosts Canella’s artworks, showing amazing depictions of the Parisian bridges. In Italy his canvases were appreciated and collected by his friend Paolo Tosio, who left them to the city of Brescia (today part of the collections of the Museums of Santa Giulia); there is also a splendid perspective of the Corsia dei Servi in Milan, displayed in the Modern Art Gallery[v]. In these canvases Canella’s training on Canaletto’s pictorial texts is visible along with a chromatic and light features of the 19th century, which our artist has developed from the style of Giovanni Migliara. This is why Canella’s canvases appear more authentic: as we can see by comparing our painting with the copper displayed in Madrid depicting the same subject, where the artists expresses himself through the pittura di tocco, here his references are Francesco Guardi and Bison, and the tone is the one of a timeless elegy; on the contrary, the figures in the canvases have their own consistency and, although some echoes from the past are not missing in the garments, the softening of the contrasts and the scattered light precisely describing every detail give the view a sense of reality, a certainly impressing feature at the beginning of the 19th century that is still fascinating us today. His ability as set designer is clearly visible in the choice of the lowered point of view, a different choice from Joli who preferred the canonical model of representing the citadel of Madrid: in this way the wayfarers on the foreground become scene actors and the monumental area is a suggestive background in front of which the show of life takes place. In addition, as a century before in Michele Marieschi’s art, the importance given to the facial features of the figures allows Canella to repeat the same view in different versions yet without producing mere copies. In the various versions he painted of this same perspective – some, such as our painting, made while living in Madrid and therefore more direct; many others made during his stays in Paris and Milan showing the success of this subject until the mid-1830s[vi] – a recurrent aspect is the presence of the Segovia bridge, with its large arches, crossed by carts and carriages: a clear allusion to the existence’s slow flow, apparently the main theme of all of Canella’s views. The unpaved streets of Madrid and the gardens of Montmartre, the Seine embankments next to the Pont-Neuf and the landscapes at the Lario or at the Garda Lake increase their meaning thanks to the human history of those living there; the romantic and anthropocentric spirit most highly expressed in the European novels of those years is also embodied in the careful analysis of the view of our artist, skilful author of stories traced on the grains of the canvas.

[vi] Among the later versions, note the canvas previously part of the Mario Praz collecion in Rome (dated 1832): Patrizia Rosazza Ferraris writes about the painting in her contribution, and she refers to our canvas as term of comparison: P. Rosazza Ferraris, Otto dipinti di Giuseppe Canella già nella collezione Praz, in “Verona illustrata”, 2004, p. 127, note 2.