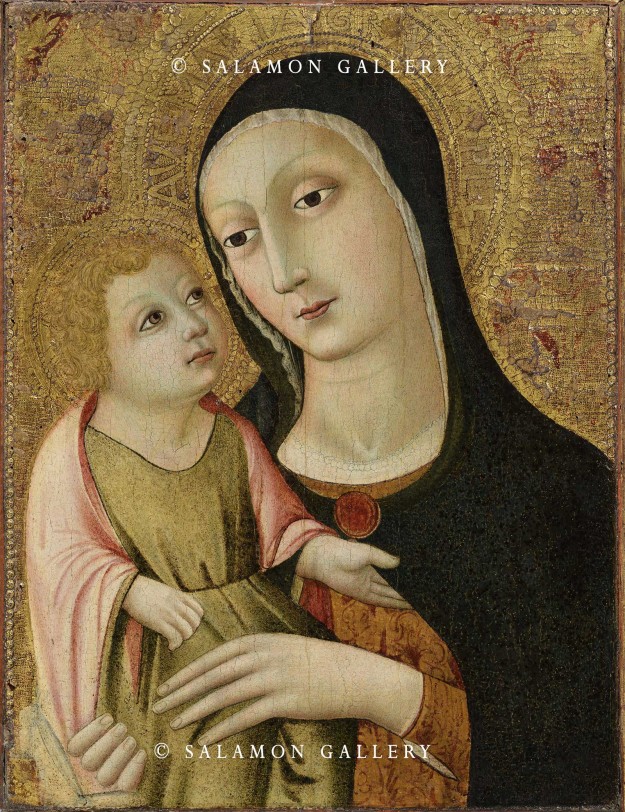 The Virgin, in a half-figure pose, holds the Christ Child tenderly on her forearm. The Child, for his part, fondly tugs at her tunic which is fastened at the breast by a coral medallion. The mother and her son are gazing at one another, their gaze filled with love and affection, yet the observer is still allowed to participate in this moment of intense emotion between them.

The panel is a splendid example of devotional painting in a well-defined historical and social context. The picture was painted in Siena and can easily be dated to immediately after the middle of the 15th century. This was, of course, an especially significant time for religious sentiment in Siena. Bernardino degli Albizzeschi, Vicar General of the Franciscan Order and last surviving testimonial of the city’s season of great mystics, had died in 1444. Bernardino’s almost immediate canonisation by Pope Nicholas V in 1450 came very shortly before the canonisation of Caterina Benincasa deliberated by the Sienese Pope Pius II Piccolomini in 1461. The example set by these two historical figures had triggered extremely widespread religious sentiment in the city and that sentiment translated into a huge demand for works of art for private devotion, particularly from the members of the merchant class[1]. Thus in Siena, even more than in neighbouring Florence, we see the start of what historians have termed the “civiltà delle botteghe”, or workshop civilisation, which led to an explosion of the number of artists’ workshops required to meet the demands of an ever broader customer base.

In the panel under discussion here the Virgin wears a mantle which also covers her head, thus causing her to resemble a late medieval saint (such saints regularly belonging to one or other order of nuns) and in particular Saint Catherine. The coral medallion on her breast alludes to the Passion of Christ. This detail, together with the vaguely melancholy look on the figures’ faces, tell us that the theme here is the Virgin’s premonition regarding her Son’s future. The affection we see in the figures’ eyes sits in perfect harmony with the gestures of their hands in what is an extremely colloquial, down-to-earth interpretation of the sacred scene, though of course that was a common feature of this kind of picture.

The fine draughtsmanship and the quality of the brushwork and goldwork started to spark an interest in the painting in the mid-20th century, when it is known to have passed through two prestigious London galleries. At the time it was held to be an autograph work by Sienese painter and illuminator Sano di Pietro, the greatest exponent of the city’s artistic tradition in the middle decades of the 15th century[2]. That attribution, however, was rejected in a study conducted by Marion Angela Knauf on the artist’s production of images for devotion published in 1998, where it is listed in the group of attributions with which she disagrees[3]. More recently, Dora Sallay (in a vocal communication) has suggested attributing it to the busy worshop which assisted Sano di Pietro from the 1440s on and continued to disseminate his models right up to the turn of the century.

Sano – whose full name was Ansano di Pietro di Mencio – was unquestionably the painter who, more than any other in Siena, set the formal standard for panels depicting the Virgin and Child, in particular for compositions of this nature imbued with feeling and mood. In that connection we might mention the almost neo-Byzantine panel formerly in the Lehman Collection and now in the Metropolitan Museum of Art[4], or – in what is an even more cogent comparison for this painting – the central panel of a triptych depicting the Virgin and Child and a Female Donor with Angels. St. Jerome and St. Catherine of Siena in the Museum of Fine Arts in Boston[5]. These designs testifying to Sano’s formal fondness for 14th century models – in deliberate contrast with the innovative Renaissance approach to perspective – were adapted by his workshop assistants to meet the taste of their patrons with the figures being rendered in a more expressive manner than the hieratic pose of the prototype. Yet the master’s quality and careful workmanship were never betrayed, with the meticulous punching and graining of the gold being accompanied by an elegantly linear definition of the figures’ profiles and a brushwork so luminous and so precious as to rival in delicacy with that of the master’s own work.

The panel under discussion here thus maintains all the best features of a picture from a workshop run by the master in person, and may therefore be plausibly listed among the pictures painted by his entourage between 1450 and 1460, a period in which Sano was extraordinarily active for his city. Thus it bears eloquent witness to the manner in which the master’s style very rapidly came to be accepted as ‘the’ style proper to tradition. And this Madonna, reminiscent in many ways of the work of Simone Martini, shows how a meticulous study of 14th century models could produce results of the highest quality even in a radically different era.