A Landscape with Figures by a River, Boats and Houses Beyond 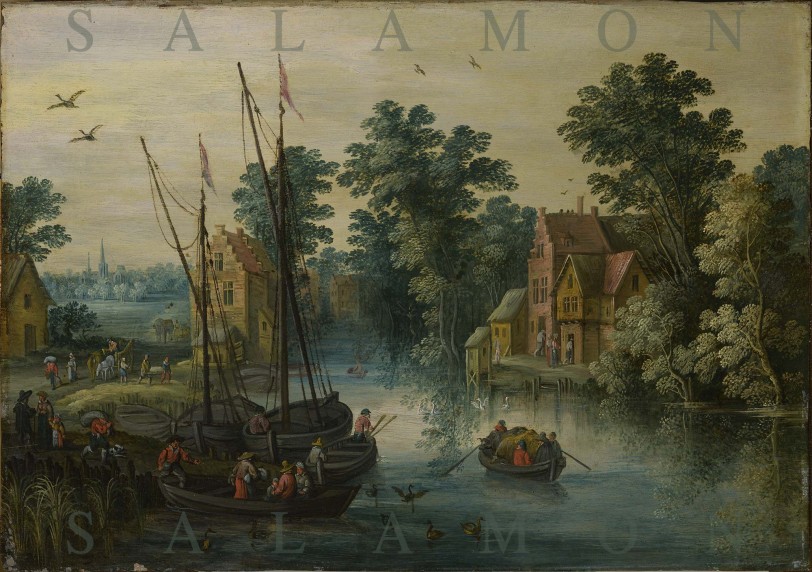 It is believed he travelled to Italy between 1607 and 1610 although no documentary evidence of this trip has been found. It is believed that during his stay in Italy he practised plein air sketching.

He rejoined the Antwerp Guild of St. Luke in 1611 and was registered as the "painter with one arm". He spent the remainder of his professional career in his native city.

He was reportedly a close friend of Anthony van Dyck, and indeed van Dyck painted his portrait (fig. 1)  in around 1630. This portrait was in the possession of Martin Ryckaert when he died and is today in the Prado. The portrait was engraved by Jacob Neefs and then included in van Dyck's book project entitled "Iconography" which contained portraits of famous people of that time.

Ryckaert fell ill in early 1631 and died in Antwerp on 28 October. He left his entire fortune to his sister Maria and his brother Pauwel (or Pauwels).

His work mainly depicts imaginary landscapes with forests, often with waterfalls, rocks, ruins, architecture and small human figures or as here scenes of the everyday in the lush Flemish countryside.  According to the early Dutch biographer Arnold Houbraken, Ryckaert’s work was similar to that of the Antwerp painter Joos de Momper.

The landscapes are often in an Italianate style and thus resemble those of the Rome-based Flemish landscape painter Paul Bril. This is particularly true for works from the period following his return from his presumed trip to Italy as Paul Bril's prints of Roman-style landscapes were widely disseminated in Antwerp at this time while the placement, style and grouping of the figures in the landscapes are indebted to Jan Brueghel the Elder.