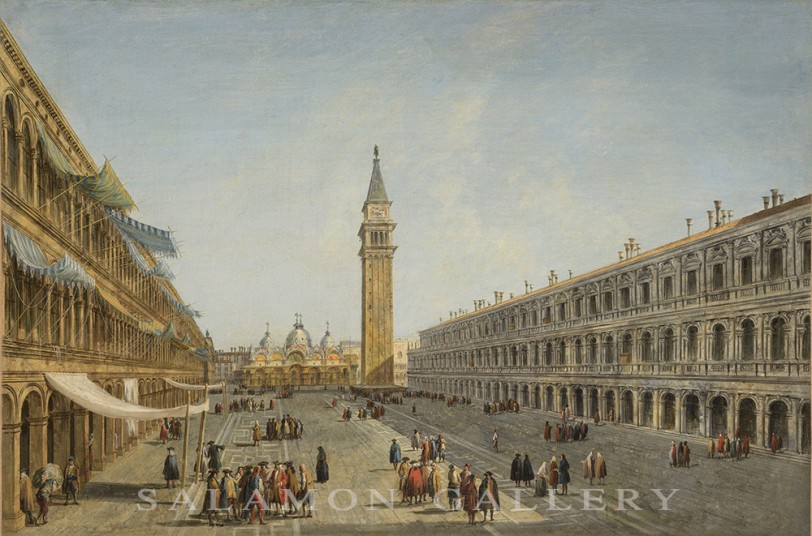 Saint Mark’s Square is depicted in all its length and magnificence from a raised vantage point, set where the extension of the Procuratie adjacent to the church of San Geminiano was at the time – later destroyed to leave room for the Napoleonic Wing in 1807. Several large groups of gentlemen and a few isolated commoners animate the square, illustrating how harmonious life was among citizens and at the same time how stylish daily life in Venice was.

As extensively demonstrated by the numerous archival research carried out by Dario Succi[i], the ancient collecting history of the present painting is of the utmost importance:  bought in Venice in a group of eighteen views by Marieschi by Henry Howard, IV Earl of Carlisle – with no less than the relevant figure of the conservator of the Marciana Library, Anton Maria Zanetti, acting as a mediator [ii]- the canvas stayed at Castle Howard, the monumental residence of the dynasty, not far from York, for a long time. Sold in London with the entire Geoffrey Howard collection in 1944, it was then in a Swiss collection and later on in a French one.

The painting has been recently analysed with infrared, with surprising results.

Marieschi executed eight autograph views using such a perspective[iii]. In addition to these, there are two canvases attributed to his pupil Francesco Albotto and many other paintings, often considered as works carried out by his workshop or followers. Among Marieschi’s views, which all share similar dimensions, apart from the painting formerly in the Malmesbury Collection, which is more extended horizontally[iv]– that the documents testify as being probably painted a few years after the others – the problem of which one was painted first, thus acting as a prototype for the composition, never came into question. Now, the reflectography investigation carried out on the present painting revealed two obvious pentimenti– they are nonetheless evident to the naked eye, now that the canvas has been cleaned and an ancient oxidised varnish has been removed. The first is on the lower left, close to the first beam of the canopy, where the painter had drawn the figure of a commoner, crouching while collecting a bundle; the second is in the foreground to the right, where two gentlemen are depicted wearing their wide cloaks while they stroll to the left.

Marieschi’s working method is well known: the painter studied the framing at length, taking advantage of all the devices he had learnt while training as a theatre set designer; nonetheless, once he had chosen and developed perspective, the artist would execute several examples of the same view for the market, directly working on the canvas and always using the same preparatory drawings. The existence of pentimentimay thus indicate that the present painting is, in fact, the prototype for this type of composition, that was replicated in a famous etching, as well; its dating should therefore be set as 1738, when Henry Howard stayed in Venice[v].

The extremely high quality of this work and its vibrant nature – also due to the artist customarily employing the Canaletto-style technique known as “fan-shaped painting” in the smooth sections of the support, by which touches of colour were fixed in a semicircle directly using the thumb’s impression on the canvas – confirms that it is one of Marieschi’s masterpieces, carried out while he was young, when he was influenced by Canaletto’s models. He would certainly interpret such models, but he did not forego his poetic penchant for the picturesque, a peculiar sign of his style and the main reason why Marieschi’s artistic output still captivates enthusiasts and collectors to this day, nearly three centuries after his death.