Madonna and Child with St. Anthony the Abbot, St. Barbara, St. Margaret of Antioch and St. Julian the Hospitaller, c. 1420 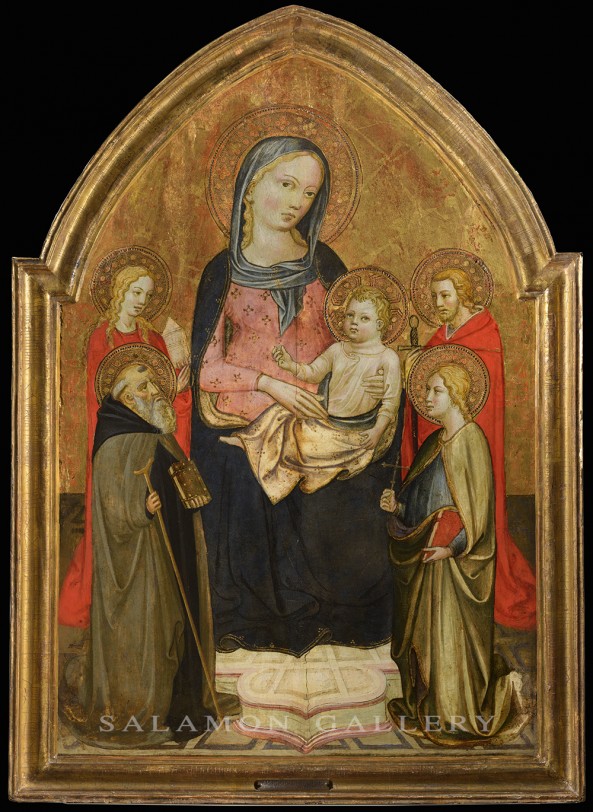 The Virgin, seated, gently holds her son while she rests her feet on a green marble base with geometrical decorations. The Baby Jesus wears a white tunic and his legs are swathed in a golden mantle. On either side of the group we see, on the left, St. Barbara holding a tower and St. Anthony the Abbot with his customary Tau-shaped staff and a book; on the right, St. Julian the Hospitaller wearing an elegant purple cloak and sporting a sword with a gilded hilt, and St. Margaret of Antioch with a crucifix and another book. The fold of her cloak reveals the almost hidden detail of the dragon that she has defeated and tamed.

The melancholy air on the faces of the Virgin and Child hints at their premonition of Christ's death on the cross. Both gaze out at the observer, imbuing the panel with a solemn, meditative quality reinforced by the four saints, all of whom are portrayed deep in thought. The choice of these figures is indicative of the work's intended destination, which was very probably a small altar in a parish church or a private oratory because Margaret and Barbara were both associated with popular worship – Margaret, who was swallowed by a dragon but saved herself by cutting open his stomach, was the patron saint of expectant mothers; while people prayed to Barbara, whose father Dioscorus, the man responsible for her martyrdom, was struck by lightning while making his way back from the place where he had murdered her, for protection against the fires that so often plagued their homes – and so was St. Anthony the Abbot, who is described in the Golden Legend (and even earlier, in the celebrated Vita Antonii written in the 4th century AD) as struggling mightily and at great length against the Devil and his temptations. In the later Middle Ages, however, Anthony was renowned chiefly for inspiring the Order of the Canons Regular of Saint Anthony of Vienne, the most important hospitaller order of the 13th and 14th centuries. The unflagging charity work performed by the Antonines in every city in Christendom at a time marked by the worst plagues ever recorded in history, spawned a new iconographical trend portrayed chiefly on votive panels or on panels intended, in any case, for the devotion of the common people[1]. The elegant figure of St. Julian, who took a vow of poverty and charity to expiate the sins of patricide and matricide, also alludes to the importance – at this specific moment in history, and more especially in a Florentine context – of the social role played by charity institutes, with the confraternities naturally heading the list[2]. Thus our panel's iconographical focus on the central role of charity suggests that it is likely to have been painted for the church or chapel of a confraternity.

The wax seals on the back of the panel tell us that the panel entered the collections of the Accademia di Belle Arti di Parma[3] at the time of Marie Louise, Duchess of Parma, before being sold abroad (before 1869, as shown by the stamp of the ‘Dogana di Dazio Grande Colli’ in Milan[4]). The absence of inventory numbers on the back prevents us from assigning the work to a specific collector before it was acquired by the Accademia, but it is interesting to note that a taste for the work of the early Italian "primitives", especially for that of Florentine masters, had gained a foothold in Parma as early as in the days of Duke Ferdinando I of Bourbon (1765–1802) when he bought numerous "gold ground" works from Marquis Alfonso Tacoli Canacci[5]. The "primitives'" continued to be popular in Parma under Maria Louise (1814–47), until the collections were dispersed in the second half of the 19th century. The notes pencilled in the margin of the photograph of the painting in the Fondazione Federico Zeri's Photographic Library[6], on the other hand, shed full light on the work's recent collecting history. Formerly in Arbury Hall near Coventry, seat of the Baronets Newdigate, the panel went to the Spink Gallery in London, before being sold in New York in 1970.

At its last sale, at the Parke Bernet Galleries, it was attributed, on the basis of a suggestion from Federico Zeri, to an artist known at the time as the Pseudo Ambrogio di Baldese[7]. The debate over this supposed anonymous Florentine painter's identity long troubled the great art historians of the 20th century. In a celebrated article in the Burlington Magazine in 1909, Osvald Sirén published a small group of previously unpublished paintings in American collections, proposing to attribute them to Ambrogio di Baldese, an artist recorded in Florence from 1372[8]. Richard Offner[9], Raimond Van Marle[10] and Georg Pudelko[11], however, deserve the credit for identifying the style of those works as bearing a greater affinity with the Late Gothic era than with the final decades of the 14th century in Tuscany. This led Van Marle to coin the conventional name of the "Pseudo Ambrogio" for the corpus of paintings put together by Sirén, and that corpus was then added to and defined over the decades by Pudelko, Federico Zeri[12] and Carlo Volpe[13]. In 1971, on the basis of a similarity between several of the works attributed to this Pseudo-Ambrogio and a Madonnasigned by “Ventura Mori” in the Pinacoteca Nazionale di Siena, Enzo Carli suggested identifying the anonymous Florentine painter as Ventura di Moro, who enrolled with the Arte dei Medici e degli Speziali in 1419 and died at a ripe old age in 1486[14]. This identification, however, was abandoned following Serena Padovani's study, in 1979, of documents relating to the decoration of the Nerli Chapel in Santa Maria del Carmine in Florence. That decoration had been attributed up until then to the Pseudo Ambrogio, but she discovered sources that revealed it to be the work of a Florentine painter named Lippo di Andrea[15]. Thus the Pseudo Ambrogio's catalogue had in fact ended up containing the work of two different artists. Most of the works could be attributed to Lippo, a pupil of Agnolo Gaddi who worked in Florence from 1395 and was thus fully immersed in the Late Gothic mood, while a smaller number could be attributed to Ventura di Moro, a painter from the next generation who also worked in Florence but from c.1420 and who basically trained in the style of Masolino da Panicale. The identification of the two personalities has prompted scholars in recent years to define with greater precision the profile of each of the two artists, whose styles had a moment of affinity in the work they both produced in the 1420s but who remain very different and easy to tell apart in their respective formal prerogatives.

Thus our panel is part of the corpus of paintings attributed to Lippo d'Andrea, an attribution convincingly borne out by a comparison of the figures with those in a polyptych depicting the Virgin and Child Enthroned with Angel Musicians, St. Albertus Magnus, St. Peter, St. Paul and St. Anthony the Abbot formerly in James Jackson Jarves' collection in Florence in the 1850s and now in the Yale University Art Gallery di New Haven[16]. The comparison is extremely cogent because the Yale polyptych is the very work that had initially prompted Osvald Sirén to embark on the study that was to lead to the creation of the new stylistic group[17]. Aside from the similarity in the pose adopted by the central group, one is struck by the affinity in the treatment of the drapery, handled in accordance with a linear taste that betrays the artist's International Gothic inspiration. In the first two decades of the 15th century, Lippo di Andrea sought his inspiration first in the style of Gherardo Starnina and then chiefly in those of Lorenzo Monaco and Lorenzo Ghiberti. It was around 1420 – the date inscribed on the base of the Yale polyptych and which we can reasonably take as a cogent reference for our own panel – that Lippo reached the peak of his artistic trajectory. In this phase, the painter presented himself as a consciously modern painter in whom the memory of the late 14th century tradition – witness the profile of St. Margaret, which harks back to the work of Agnolo Gaddi – is combined with a handling of perspective in his arrangement of the figures that is especially significant if we consider the cultural climate that was gaining a foothold in Florence in those years. Lippo appears to partake of this new climate, which it is plausible to suggest that he must have picked up from a master close to his own sentiment, such as Masolino da Panicale. His repetition of modules and fomulae – in addition to the Jarves polyptych, the panel under discussion here may be compared with a Madonna and Child Crowned by Angels with Four Saints formerly in the Vittorio Cini Collection in Venice[18] and with a Madonna and Child with St. Stephen and St. Jerome which Volpe added to the Pseudo-Ambrogio's catalogue[19] –, far from revealing the painter's limitations, is in fact a symptom of his belonging to the world of the workshop, which showed as early as in Cennini's Libro dell'arte just how successfully it had taken hold of Florentine art. Thus Lippo di Andrea's fairly substantial output proves the extent of his popularity with private patrons, a popularity in Florence that was not to wane until his old age, as we can see from payments he received for taking part with masters far young than he was in the decoration of the chancel in Santa Maria del Fiore in 1436[20].