The Fortune Assists the Malta Family from the Snares of the Lawyers, c. 1778 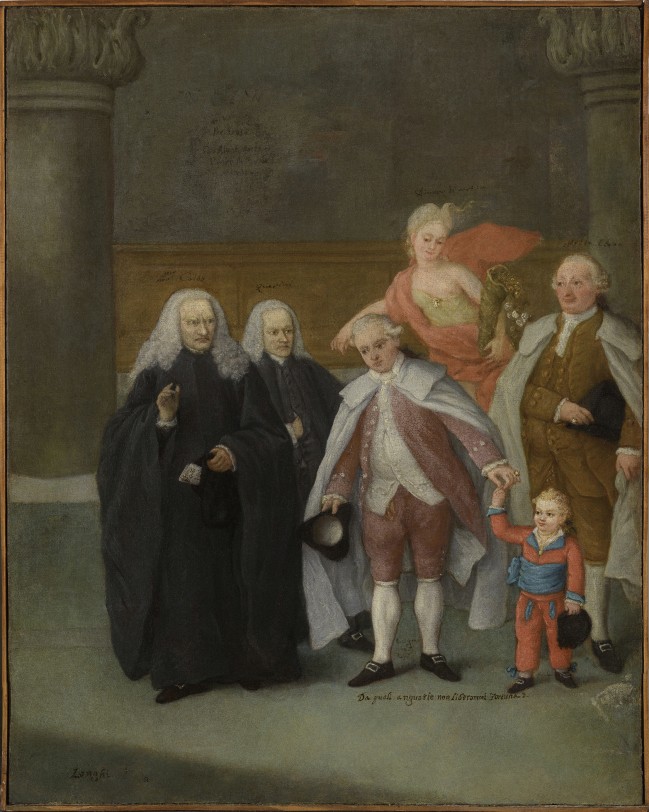 In a hall of the Doge Palace in Venice, the protagonists of a civil lawsuit that has just ended meet:  two representative of the Serenissima are on the left, most likely furious for the result of the verdict, while an allegorical figure of Fortuna is pouring gold and silver coins from a cornucopia on two gentlemen and a boy who has a visibly satisfied and a little malicious expression. The dichotomy between good, impersonated by the value of family and the winners' humble poise, whose gaze have no trace of boldness, and evil, depicted in the rage and the intimidating gestures of the two aristocrats, one pointing at the opponents as to promise revenge, is clearly visible.

This beautiful canvas, signed on the lower left by Venetian painter Pietro Longhi, has been brought to the critics' attention in the exhibition on the 18th century Venetian painting in Rome, at the Palazzo Massimo alle Colonne, in December 1941[i]. The title of the canvas was “The Lawyers”, and the brief catalogue description referred to the sentence written under the feet of the gentleman holding the hat:  “Da quali angustie non liberommi fortuna?”. According to Alessandro Morandotti, author of the description, the painting was a sort of profane ex-voto: this painting had been commissioned so that a citizen who had just escaped from the snares of the two men of law depicted on the left could homage fortune. In his monograph Vincenzo Moschini basically confirms this iconography, just interpreting the sentence written on the wall on the background, with a reference in the second line to doge Alvise IV Mocenigo. Moschini also suggests that the painting might be dated around the last years of the dogato of Mocenico, who died in 1778, since he has found some formal similarities with the works that Pietro Longhi painted in the same years[ii]. Terisio Pignatti suggests the same dating, 1777-78; he writes about the painting in his monograph[iii] and later in the volume published by '”Classici dell'Arte Rizzoli”[iv].

Basically for now, or at least as far as the iconography of the canvas is concerned, scholars have only taken into exam the sentence written under the younger gentlemen and the child, disregarding the others that are nowadays much more legible thanks to the recent cleaning. For instance the figures of the two 'lawyers' (we should actually call them 'avogadori de comun' of Venice) are now recognizable as Giammarco Calbo and Giovanni Querini: their names are written above their heads on the wood of the chairs , and we can also see Calbo’s name on the letter (maybe a report) sticking out of his bag.  Above the head of the elder gentlemen who won the trial is the sentence “Malta Ebreo”, while above Fortuna’s head of hair we can read "Dinaro di Malta". The inscription on the wall is the only illegible one  yet a partial interpretation was possible thanks to reflectography: the reference to Mocenigo is confirmed ( “Per. Doge Giov. Alvise Mocenigo”) – and therefore the dating of the canvas can be confirmed to be the one Moschini and Pignatti have suggested – yet instead of praising the doge's magnanimity it rather is a chronological reference for a trial that might have probably been quite discussed in Venice.

The inscriptions clarify the nature of the subject: the Malta dynasty is the protagonist of the painting, one of the most important Jewish families both in and outside of the Venetian Ghetto. A family that is known since the mid 17th century[v] and that is recorded among the “wealthy” merchants in the 1797 census, at the end of the republic and hence at the end of the Jewish segregation[vi] (ten years later, in 1807, their gondola participated to the regatta organized for the arrival of Napoleon in the Venetian lagoon). Given the current state of studies it is not possible to undoubtedly identify the three figures – although it is suggestive to think that the boy might be Gabriel Malta, often mentioned in the local news at the beginning of the 19th century –, nor have other pieces of information on the civil trial whose result is depicted on the canvas. Nonetheless, it seems that this trial took place when relations between the Venetian patriciate and the magnates of the Ghetto were very tense: at the beginning of the 1770s a series of laws intended to affect the economy of the Jewish minority had forced many merchants of the ghetto to smuggle on the mainland, causing in the city a substantial deflation; this nurtured the subtle hate of the Venetian merchants and the patriciate, and a new strongly legislation that limited and segregated the Jews was approved (the famous 1777 ricondotta). Besides, most of the Great Council was made of the so-called Novatori – the group Querini and Calbo were part of –, radical extremists clearly with strong anti-Jewish feelings who wanted Jews to leave Venice and strongly supported assets trials on behalf of the state. Things changed under doge Paolo Renier (1779-1789) when it became clear that the economic activities of the Ghetto were a fundamental part of the economy of the Venetian state and that therefore had to be protected. Certainly at the end of the 1770s many Jewish merchants in Venice had to invoke Fortuna to protect their assets.

Therefore our painting attests to an important historical phase: while throughout Europe the enlighten policy of the princes, who followed the advices of the philosophes, had opened the gates of the city ghettos and cancelled any kind of segregation as heritage of a past of barbarity, in Venice the most noble families sheltered themselves to protect privileges of the middle ages, persisting in hating the Jews with the absurd presumption that harassing laws against them would favour local merchants. As Morandotti suggested this canvas is therefore a secular ex-voto, most likely commissioned by the Malta family itself to document one of the most difficult moment if the life of their community (and the fact that the painting was later part of the collection of another famous family of the Venetian Ghetto, the Romanin Jacur, confirms the importance of keeping the memory of local events alive). Another splendid anomaly of the great story of social redemption depicted in the painting is that the painter chosen for this canvas is one of the most famous Venetian masters of the 18th century – in a very successful phase of his career as the famous Caffè attests to it (this painting was previously part of a private Collection in Florence) [vii], not by accident used as a term of comparison for our canvas: Venice was not only the city of people like Querini and Calbo, a place infected for centuries with anti-Judaism; Venice was above all a state whose tribunals could demand justice for the weakest, despite the arrogance of the patriciate; and Venice is the homeland of Longhi, responsible to tell, with his usual wit, this important episode of the life of the city. In a historical moment when society and its leaders seem to be trapped in a spiral of regression and incivility, art and its protagonists have to lead the way towards the redemption and the beginning of a bright era with equal human rights for all mankind.

[vi] R. Calimani, Storia del ghetto di Venezia 1516-2016, Milan 2016. From the police reports we know that in 1761 the Maltas have been indicated as usurers (the most “stochegianti” in all Venice): P. Preto, I servizi segreti di Venezia. Spionaggio e controspionaggio ai tempi della Serenissima, Milan 2010, p. 547.