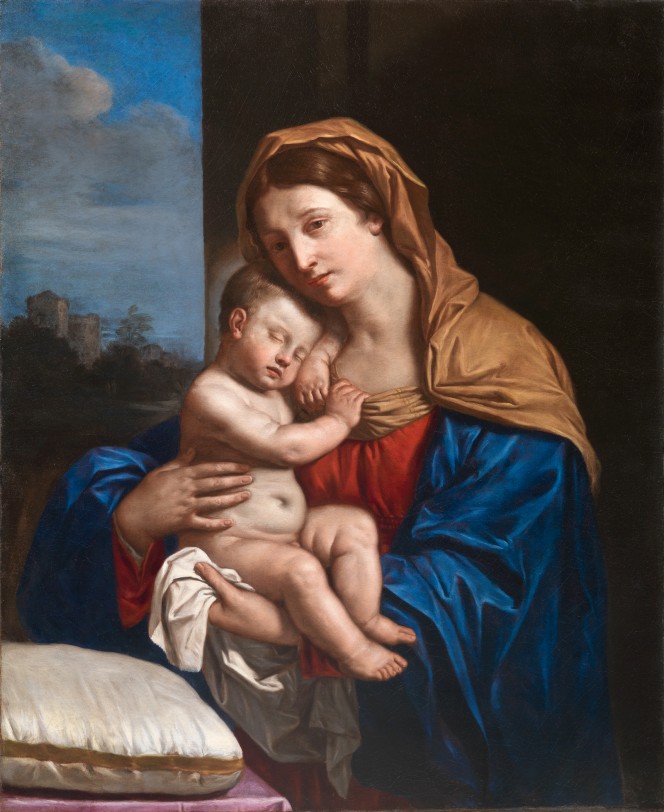 The figures of the Virgin and the sleeping Child stand out vividly from the background, which is dark on the right and open on the left to show a strongly humanised landscape – with the reassuring presence of a fortress and a group of farm houses in the distance. The intimate and quiet nature of this enchanting painting for private devotion clearly shapes the artwork for a snug environment, probably a bedroom; this is therefore a useful visual representation of the evening prayers of a scrupulous devout Christian.

The critique of the canvas is quite recent: it has been for sale at a 2008 auction in Milan with a precise reference to Guercino, which Daniele Benati supported in that occasion, and in the lot essay the painting has been identified – although just as an hypothesis – as the one painted in 1638 and given the same year to Sebastiano Butricella, notable of the city of Cento[i]. In addition, Nicholas Turner has agreed with this identification: the English art historian claims that the canvas is close to the style of Guercino’s last years in his hometown[ii]; furthermore, Turner believes that the price Butricella paid for the canvas – a two tranche payment in October 1638 registered in the Libro dei conti[iii] - corresponds in Guercino’s usual price list to a composition featuring a half-length and a putto, that is our painting.

Nonetheless, if we observe the chromatic quality of the fabrics, first of all the dark pink cloth covering the flat surface, then the shadows of the white pillow’s wrinkles and the well-defined bright red and blue of the Virgin’s dress and cloak, our thought goes to the paintings Guercino painted a decade later in Bologna, between 1647-48, a just as particularly productive period of the master’s career. The group of the Virgin with the Child can be compared with the one painted in the upper part of the Vision of Saint Bruno, a large canvas accomplished in October 1647 for the Certosa of Bologna to decorate the high altar of the church (today part of the collections of the Pinacoteca Nazionale in Bologna)[iv]. Another relevant group is the one in the upper left of the altarpiece with the Ecstasy of Saint Philip Neri of the Saint Mary church of Galliera, which Guercino made the same year in November[v]. As for the white of the pillow and the white of the linen sheet with which the Madonna is about to cover the son’s naked body, which both feature very light luminous variations that tangibly highlight the object’s reality and freshness, they closely remind of Cleopatra’s bed in the famous canvas sent in Genoa to Carlo Emanuel Durazzo in March 1648, today part of the collections of the Gallerie di Palazzo Rosso[vi]. Considering these formal analogies and the usage of the colours, we are now able to identify our painting with the one executed in 1647 and sold on 23rd  November to a “gentleman from Reggio”, as written in the Libro dei conti[vii]. Due to the nature of the painting, the usage instructions Guercino writes in person in his register do not come as a surprise: “la Madonina che staua dal mio letto” (“the small Madonna next to my bed”). Therefore this canvas was at first painted for the artist’s personal religious devotion and then sold to a local buyer. The latter’s name can be deduced from the pages of Malvasia: in an appendix to Guercino’s biography in the Felsina pittrice[viii], the canon illustrates the master’s activity with a calendar of the paintings listed ad annum, based on manuscript documents – first of all the Libro dei conti – left by Paolo Antonio Barbieri. Among the other works made in 1647 we find “Una B. V. col bambino che dorme al sig. Zanelletti di Reggio” (“a Holy Virgin with sleeping Child to Mr Zanelletti of Reggio”). The presence of the sleeping Child is crucial to identify our canvas. In the large catalogue of Guercino’s canvases (Nicholas Turner counts almost 500 paintings on canvas) this is the only subject of this kind and no other ancient source, neither manuscript or edited, mentions it. This is therefore a crucial argument to retrace the provenance of our painting: a subject for religious meditation painted with the usual ease of Guercino’s art, yet without the wide gestures that characterise the artworks intended for public spaces or staterooms in palaces. Therefore a painting with a bourgeois propensity – and mister Aurelio Zanelletti of Reggio Emilia was a bourgeois – and the quality of its finish is simply impressing; yet at the same time it is quiet and calming, clearly made for a private house rather than a sumptuous residence. The recent cleaning allowed to recover a detail of the landscape on the left, in which we can now see two wayfarers, protected by the fortress, to significantly indicate the slow development and carrying out of everyday life in a world made more peaceful by the Saviour’s birth. Therefore a parallel between the paligenesis of nature with the advent of Christ and the ambition of peacefulness in the existence of every man, interpretation of the devotional nature lying behind a work of art like ours.

Nicholas Turner believes that a previous version of this artwork, in his opinion a sketch, can be the painting attested until 1945 at the Sanssouci Castle in Potsdam and today lost, known only through a picture of the beginning of the 20th century of the Witt Library archive. The disappearance of the canvas, bought in Paris in 1763 and the same year part of the rich collections of Frederick II of Prussia[ix], does not allow us to establish which one is the first version of the subject, nor if the painting once belonging to the King of Prussia was painted by Guercino or rather is a workshop copy. Yet, the presence in our painting of a small pentimento, in the Virgin’s right little finger, should be a quite relevant clue to certify that this artwork was painted before the version that has disappeared at the end of the Second World War. As Turner properly suggested, in our composition Guercino draws from the repertoire of Guido Reni, especially from the etching with the Virgin and the sleeping Child[x] - source of inspiration of also another famous canvas made by Giovan Battista Salvi called Sassoferrato (Urbino, Galleria Nazionale delle Marche). Reni lamented the attitude of his rival from Cento (“pesca le mie idee e cerca il mio fare”, “he looks for my ideas and seeks my doings”), well aware that his own importance in the commitment of the region had forced Guercino to follow against his will the formal models he had imposed. Yet we are now in a later period, five years after Guido’s death: drawing from his ancient rival’s repertoire becomes for Guercino not only a sort of homage, but also an implicit acknowledgement that the higher style and models inevitably remained those of the great season of the first 17th century. In 1642, the year of Guido’s death, Guercino moved to Bologna to inherit the centralising role that Reni had kept intact for more than 30 years of prestigious commitments. Behind that life choice, and behind the decision of repeatedly use Reni’s models in the works of those years, was Guercino’s awareness of being the last painter of the splendour of a unique time. While Guido’s pupils were trying to start their own personal journey to detach themselves from the influence of such an important master, Guercino was establishing his style repeating what he had already tried in the previous decade, renovating his colours on the French academic taste. Our painting is an important trace of this renovation inside the tradition: the aspiration to a well-thought clear classicism Ingres and the 19th century purism would have liked. And that keeps on capturing our gaze today and transporting our feelings in a hortus conclusus of simplicity and formal perfection.