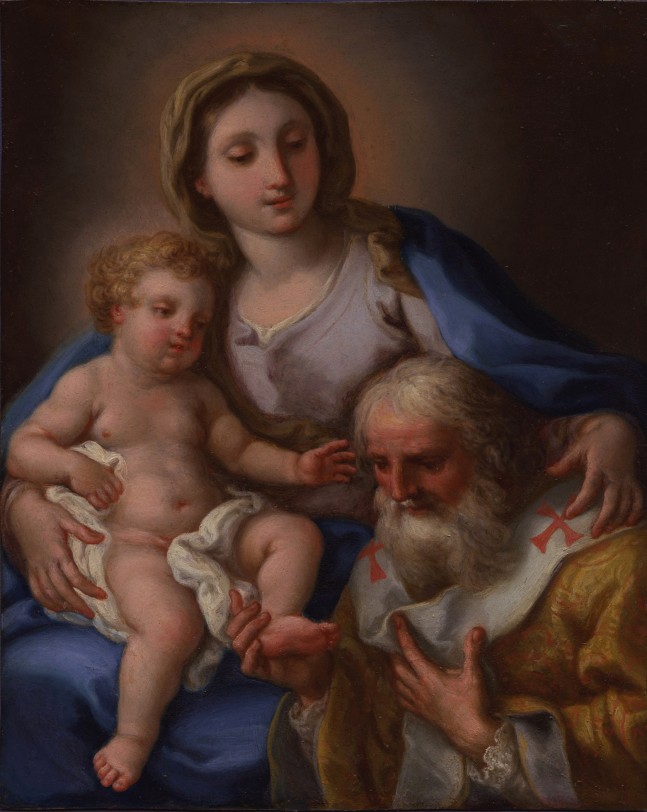 We are grateful to dr. Mario Epifani for writing this entry

This painting on copper is a typical example of Sebastiano Conca's mature production, belonging to the fair number of small-sized paintings on copper with devotional subjects made by the painter in the last thirty years of his activity, starting from the fourth decade of the Seventeenth century. Born in Gaeta in 1680, Conca trained – according to the informations given by the biographers of the time – in Naples, in Francesco Solimena's vast workshop. Despite his origins and his Neapolitan training, the painter's long career took place almost uninterruptedly in Rome, where he arrived around 1707 when he was more than twenty-five-year-old. Except for his 1731-1732 journey in Tuscany, Conca managed to shape a sound reputation by constantly working in Rome, where he specialized mainly in the production of altar pieces for the Papal States, as well as for other Italian cities (Palermo, Turin, Pisa, Siena). His name is strongly connected with the Accademia di San Luca, the powerful association of artists of which he was principe twice, in 1729-1732 and again in 1739-1741. Under the protection of cardinal Pietro Ottoboni, influent patron of the arts, since his first Roman years, Conca was quite sough-after by important European customers and collectors, such as Thomas Coke count of Leicester, Franz Lothar von Schönborn archbishop of Mainz, Maximilian II Prince Elector of Bavaria and Philip V king of Spain and John V king of Portugal. On the strength of his international success and his academical authority, the painter was among the protagonists of Roman painting of the the second quarter of the Eighteenth century; well on in years – and with the arrival of more specifically neoclassical new trends, supported by pope Benedict XIV Lambertini and well represented by a painter as Anton Raphael Mengs – he returned to his homeland where he continued his activity until the great age of 84 making frescoes and altar pieces for Naples, Gaeta and other towns of the Bourbons' kingdom. Since the 1730s – after a few previous isolated experimentations – Conca made quite frequently small-sized oil paintings on copper, a congenial technique to the precious chromaticism of his painting which combined the executive sensuality of Neaple's baroque school with a careful control of the compositional balance and a moderate expression of the affections. This classicist trend is in line with the tradition permeating Italian art from Raphael to Annibale Carracci and including Carlo Maratti, leader of the Eighteenth century Roman painting and unavoidable element of comparison for Conca's works. The subjects of these small-sized paintings on copper range from the unknown Saint Cecilia (once in London, Agnew's) signed and dated 1733, to the Rest during the flight into Egypt of the Brinsley Ford collection, dated 1738; later are the Saint Augustine of the Pallavicini collection, dated 1740, and the Madonna with the Child, once in the Morandotti collection, displaying the date 1740, year of death of the painter . Particularly recurrent during the last decades of Conca's activity are the paintings intended for private devotion representing the Madonna with the Child (with the possible presence of other saints), the Holy Family or single figures of saints. In our painting the Virgin is offering the Child to the devotion of a saint, about to kiss his left foot. Although without attributes, the saint is wearing an omophorion, a long white stole with embroidered crosses which is recurrent in saint Nicholas of Bari's iconography and reproduced in two other canvasses by Conca: the altar piece for the Santa Casa of Loreto and a signed canvas representing the half-length saint (once in Rome, Finarte). The Bishop of Myra appears in two other altar pieces by Conca as well, the one of the Ruffo chapel in San Lorenzo in Damaso in Rome, datable back to 1743, and the one of the church of San Nicola in Foligno, dated 1752 . The same features of the saint maintain a certain coherence in all the above paintings, scattered on at least a decade-long activity: according to stylistic considerations, it is therefore plausible that the great canvas of Loreto – Conca's only work in which the saint bishop is the only protagonist – was made around 1740. If on the one hand the grainy and rarefied representation of the figures is in line with the style of the works made by a mature Conca, around the mid-Eighteenth century, on the other the Virgin clearly echoes the same figure he had painted between 1721 and 1725 in one of the two altar pieces made for the church of Saint Hubert in the Royal Palace of Venaria, and particularly the one featuring the Madonna with the Child and Saint Francis of Sales . Similar examples of using again already experimented solutions, even decades later, aren't uncommon in Conca's work: once defined his own style, already since the forth decade the painter remained mainly faithful to the compositions of his first works, at the point that it is often hazarduous to date his paintings according to formal informations alone. Nonetheless, besides the subjects and the composition, a stylistic evolution is perceivable from a bright representation and a more properly rococo tone of the paintings prior to 1730 to that “chromatic relaxation” and “simplification of the forms”already recognized by Sestrieri in Conca's late works . Besides this natural stylistic transformation, the predilection for the tenderness of the affections – manifest, as far as this painting on copper is concerned, in the expressions and in the graceful gestures of the figures – and for the peaceful and calm tones, enhanced by the luminous and soft tone colour, is constant in Conca's paintings.