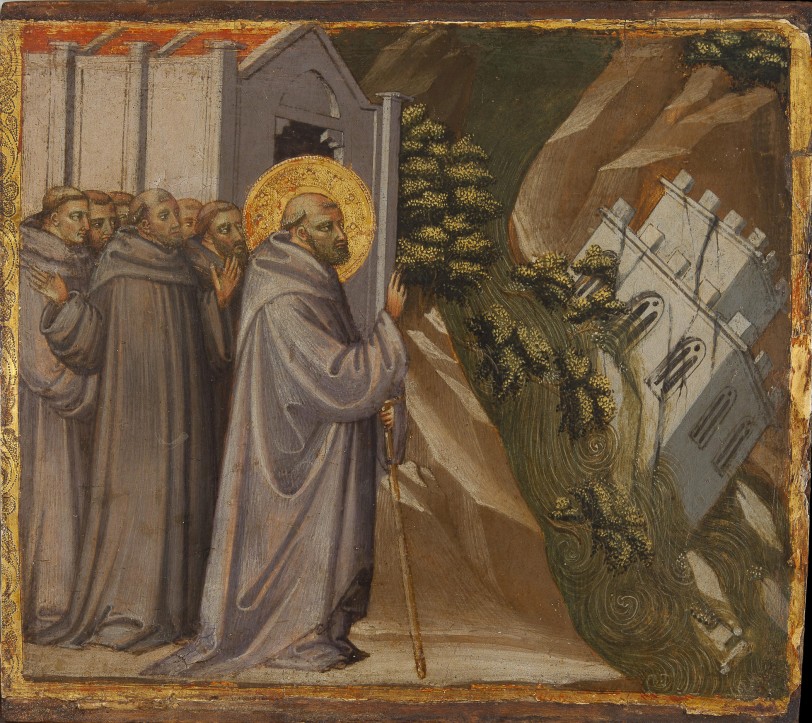 In a bleak and rocky landscape, closed on the right by a vast massif, a stern Benedictine saint is about to reveal to his dazed followers a calamitous vision: a building, by appearance an aristocratic tower house, is swept away in an escarpment by a river in flood. The iconography is one of the most interesting aspects of this extraordinary painting, with full rights studied and illustrated by Kaftal in his list of images of the saints in Tuscan painting : the saint depicted is John Gualbert (Florence, around 995 – Badia a Passignano, 1073), founder of the Vallumbrosan Order . A Benedictine monk, he stood out in his fight against simony, an endemic evil of the regular church in that historical period; persecuted for this reason by the bishops of Florence Atto and Pietro Mezzabarba, he withdrew with some monks in the Vallombrosa forest in the Valdarno and gave the comunity a new rule, based on the adherents’ refusal of the earthly possessions. The motherhouse in Reggello always remained the centre of the order, but the most important church of the community was the Florentine church of Santa Trinita (formerly Santa Maria dello Spasimo), documented since 1077. Our painting represents the miracle of the ruin of the abbey of San Pietro a Moscheta. According to the legend, the saint, very first founder of the abbey, raged when he saw the richness and evaluated the useless waste of money needed for the construction of the building, which besides appeared to be more similar to a city building rather than a place of worship. So John, once gathered the monks around him on a hill, commanded the river Seve to pass over the mountain and devastate the abbey, which was later reconstructed with shapes that were more moderate and close to the principles of the Vallumbrosans. The importance of our painting can be valued by simply considering its origin: it is one compartment of the predella of the polyptych made by Bicci di Lorenzo, in collaboration with Stefano d’Antonio Vanni, for the altar of the forth chapel on the left of the church of Santa Trinita in Florence. The polyptych was commissioned in 1434 by the banker Cante di Giovanni Compagni, one of the wealthiest and most influent protagonists of the Republic of Florence, and was still on the altar in 1755, when it was described by the historian Giuseppe Richa in his account on the churches of the city of Florence . The following dismantling brought the larger compartments, featuring the Virgin with the Child on the throne among the saints Anthony the Abbot, John Gualbert, John the Baptist and Catherine of Alexandria, in the British royal collections and therefore in the Westminster Abbey, where they are still today conserved on the high altar. This is the only fragment remaining of the predella – which according to Richa had on the centre the inscription with the date ‘1434’ –, originally situated right under the figure of John Gualbert. Cante di Giovanni Compagni commissioned as well to Bicci di Lorenzo the fresco on the hall arch of the chapel, also dedicated to the memory of the Vallumbrosan saint, featuring the scene of John Gualbert forgiving the murderer of his brother. It is not a surprise that the patron chose Bicci, in a moment when Florence probably experienced its highest concentration of painters – in 1434 in the city Angelico, Filippo Lippi, Domenico Veneziano and Paolo Uccello worked, among the others. For almost thirty years Bicci di Lorenzo had been the head of one of the most active workshops, opened by his father Lorenzo di Bicci (1350 – 1427) in the second half of the fourteenth century; the workshop left remarkable and numerous traces, with fresco decorations and altar polyptychs, proving the attempt – prerogative, nevertheless, of many Florentine artists at the beginning of the fifteenth century – at combining a more precious chromatic and tactile suggestion, deriving from the international taste, with the usual morphology of the late Giottesque tradition. The relation between the iconography – suggesting a moderate characterisation of the forms, in accordance with the pauperistic moral of the Vallumbrosians – and the sumptuous usage of the gold to depict not only the halo of the saint, but even the leaves of the trees, dragged by the current of the river, is an amazing antinomy of this painting. If on the one hand the figures of the monks don’t exceed in graphic elements, on the other the movement of the water is conveyed through an admirable rhythm of abstract signs, sometimes carved as scratches on the support. And the vivid characterization of the expressions, at the same time dismayed and mortified, of those who are witnessing the miracle, represents the key to the reading of the narration, delicate in its formal representation but not less evocative and edifying for the observer.