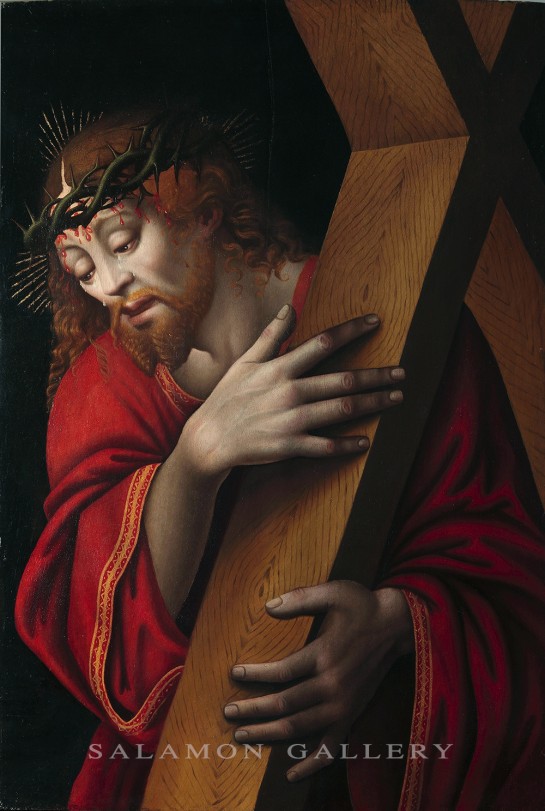 In presenting the image of Christ carrying the Cross through a mid-length portrait on a dark background, without any environmental reference, the painting relates to an iconographic interpretation for private devotion purposes that was highly successful in Northern Italy from the last decades of the Fifteenth century (S: Ringbom, Icon to narrative, 1965, ed. 1984, pp. 147-155). In this background, the experiences within the Milanese Renaissance were particularly pivotal; in this context, the familiarity with this specific representation was stimulated notably by the studies on this subject carried out by Leonardo himself and attested by a famous drawing of Venice's Academy's Galleries made at the beginning of 1490, probably for a small-sized pictorial interpretation of the scene of Christ carrying the Cross, of whom we have no news, though. The fact is that the explorations of the Tuscan artist favoured the great success of this subject among the Milanese painters, sensitive to Leonardo's lesson, that from Marco d'Oggiono to Andrea Solario and Giampietrino tried at various times their hands on this devotional image, presenting from time to time different solutions, yet having all the mid-length portrait size of the composition and the adoption of a completely dark background in common. Therefore it is in the light of this particular tradition that we should analyse this painting; besides aligning with the iconographic features just described, it shows a precise stylistic contiguity with Leonardo's figurative culture, remarkable in the clearly visible consonances with Marco d'Oggiono, Giampietrino and Cesare Magni, noticeable especially in the enamelled and carefully chiaroscuro quality of the complexions. Hence, there is no doubt that this painting should be placed in Milan's Leonardism context, yet with the warning that his author has to be sought not among the first followers of the master, but slightly later, as the drawing emphasis and the monumental effects of central Italian origin marking the figure and his superabundant scarlet drapery show. All these prerogatives are fully traceable in the stylistic orientations of Girolamo Figino, the interesting Milanese painter rediscovered not long ago (see in particular F. Frangi, Girolamo Figino ritrovato, in ‘Nuovi Studi’, II, 1997, 3, pp. 31-40; for details on bibliographic facts about him, see R. Sacchi, in Pittura a Milano. Rinascimento e Manierismo, by M Gregori, Cinisello Balsamo, 1999, p. 266), active in the central decades of the Sixteenth century; nonetheless, he showed, in such a late time as well, a strong loyalty to the Leonardesque language and an inclination towards elaborating his models in terms of a formal academicism. The particularities of Figino's expressive features emerge clearly through the impressive series of altar pieces marking his work, from the early Holy conversations, of Berlin's Gemäldegalerie and Cambridge's (Ma.) Fogg Art Museum, dating back to around the 1530s, to the 1559-1560 Madonna with the Veil in Milan's church of Saint Ambrose, and to the Holy Family with Saint Syrus of the church of Saint Mark, in Milan as well, than can be dated back to 1569. Compared with this sequence, Christ carrying the Cross shows precise correspondences especially with his most late episodes, that are the two altar pieces still in Milan; they have in common the tanned tone of the skins and the major statuesque solidity of the figure, enhanced by the complex tangle of the drapery, patterned by an insisted system of folds that seems to be a recurring pattern in Girolamo's pictorial practice. Then, keeping to the point of the Milanese artist's style customs, we cannot not notice how the protagonist's vigorous right hand, represented in the middle of the painting supporting the cross, presents a highly significative singularity, actually real Morelli's leit motiv in Figino. I am referring to the strange position of the fingers, with the middle finger close to the ring finger and the little finger from far the index finger: a pattern, or rather a drawing twich that we can find practically in all of the painter's known work, from the early painting in Cambridge mentioned before to the later Madonna with the Child with Saint Martha and Magdalen of the Uffizi Gallery, emblematic example of Leonardo's formula's interpretation from the precise and academically impeccable viewpoint of our artist. Lastly, we should consider how adding this work to Figino's narrow corpus allows us to confirm the painter's familiarity with Gaudenzio Ferrari and his Piedmontese followers' language as well – so active in Milan around the mid-Seventeenth century -, evoked by the intense and non idealized characterization of the Christ's suffering face.