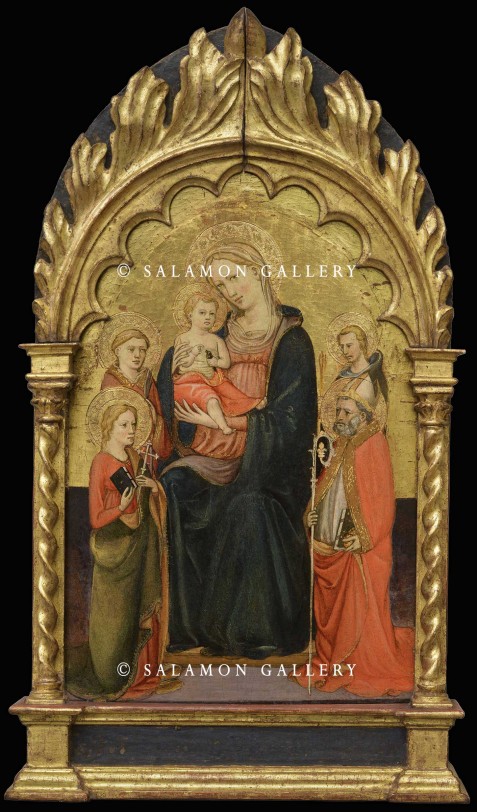 Both the form and the composition of this charming small altarpiece intended for private devotion were extremely popular in Florence for about a hundred years, more especially from the second half of the 14th century. The young saint upper right, with his blond hair and straggly beard, is clutching three arrows in his hand and can thus be identified as St. Sebastian in his iconographical capacity as a knight, an iconography also found in the side panel of a triptych by Puccio di Simone1. The other young saint, upper left, may be identified with certainty as St. Lawrence because we can can glimpse a part of a gridiron, his traditional attribute, almost merging with a small cross in the left hand of the female saint in the foreground, who also is also holding a book in her right hand and may be either St. Margaret or St. Cecilia. The sainted bishop bottom right is St. Nicholas who holds a crosier in his right hand, while in his left he holds a book and the three gold coins that he gave to three impoverished maidens from his birthplace, Pàtara (formerly Arsinoe), so that they might wed2.

On recently emerging from a private collection, the picture was found to have been considerably retouched, particularly with regard to the saints’ garments. Shellac-based varnish and extraneous matter had darkened the painted surface. In the lower part of the panel one could make out the semicircular step of the throne, it too the product of rough-and-ready repainting which had itself already begun to drop. The wooden support presented a vertical crack crossing its entire surface, which had also caused minor paint drops. A strip of roughly four centimetres had been added to the arch and a dove representing the Holy Ghost had been painted in it, above the Virgin’s head. Restoration by Loredana Gallo, performed in 2021, has achieved a most satisfactory result, reviving the freshness and luminous palette typical of the Late Gothic period. All repainting was removed and the wooden support was consolidated. It was felt opportune to maintain the strip added to the arch, which is in any case clearly identifiable, while the poorly painted dove representing the Holy Ghost was removed.

Cleaning revealed the original brushwork to be in excellent condition, with only minor paint drops and, thankfully, the loss of only a part of the sophisticated gold decoration on the saints’ garments. The exquisite yet firm draughtsmanship characterising the painting can be perceived with the naked eye, but it emerges with absolute clarity under IR reflectography, which reveals details of suprising graphic freshness such as the heads of the Virgin and of St.Nicholas .

I had no personal prior knowledge of the panel but its attribution to Lippo d’Andrea appears at a glance to be absolutely unquestionable.

Small altars like this one, designed for private devotion, are a fairly frequent feature of Lippo d’Andrea’s extensive output, as we can see from comparison with another exemplar that appeared on the art market in London in 1970 and resurfaced on the art market in Florence in 2012. Its remarkable similarity with the panel under discussion even extends to the decorations stamped on the saints’ halos, albeit of slightly inferior quality.

Serena Padovani first put foward the suggestion that Lippo d’Andrea may be the “Lippo fiorentino” to whom the sources attribute the altarpiece in the Nerli Chapel, or Chapel of the Passion, the first chapel in the south transept of Santa Maria del Carmine in Florence, depicting the Deposition of Christ from the Cross. The altarpiece in question has been lost, but the frescoed Crucifixion (Tartuferi 1992, p. 149 and fig.6) which once adorned the chapel has made it possible to attribute to Lippo d’Andrea a large number of the works initially given to Ambrogio di Baldese and subsequently, by Van Marle, to the so-called Pseudo-Ambrogio di Baldese.

Born c, 1370, Lippo enrolled in the Arte dei Medici e Speziali guild in c. 1395 and is listed as a member of the Compagnia di San Luca in 1411, when he was living in the neighbourhood of Santa Maria Novella. In that same year he was one of a group of painters working on the now lost decoration of the Palazzo del Ceppo in Prato, while in c. 1416 he was working in San Miniato al Tedesco where, among other things, he frescoed the chancel of San Domenico. In 1436 he and a number of fellow Florentine artists were commissioned to paint the figures of the apostles on the side aisles of the cathedral of Santa Maria del Fiore in preparation for its consecration, By 1451 he was dead3. Training in the substantial circle of artists revolving around Agnolo Gaddi, Lippo seems to have gone through a phase of convinced subscription to Neo-Giotto-ism around the turn of the 14th century, but from the middle of the first decade of the 15th until c. 1425-30 he devoted his energy to translating and popularising a more relaxed and immediate version of the sublime, sophisticated style of Lorenzo Monaco. From c. 1430 until the end of his career some time in the mid-1440s, Lippo appears to have been influenced in part by the most important artists – men such as Giovanni Toscani, Masolino da Panicale and Giovanni dal Ponte - who had spent their formative years immersed in the Late Gothic climate but who were now trying to tailor their style to the new Renaissance manner, although he never quite managed to equal the quality of their work.

The painting under discussion here is a particularly successful and splendidly executed example of the phase in which Lippo sought his inspiration in the art of Lorenzo Monaco. Everything in it echos the manner of that great Camaldulese friar and painter, from the graceful figure of the Virgin to the transparent veil edged with delicate white touches covering her hair. The latter is in fact a feature that was introduced chiefly by Lorenzo Monaco and of which he was especially fond. The palette also owes a huge debt to Lorenzo Monaco, with its brilliant yet deliberately sfumato colours, as does the flowing drapery of the Virgin and of the two saints in the foreground, the hems of their robes embellished with gilded decoration. This particularly successful interpretation of the manner developed by the Camaldolese painter and illuminator, an interpretation that appears in this painting to reveal less of a servile approach than we find in the example we have chosen for purposes of comparison, suggests that our picture should be dated somewhat later, probably towards the end of the first quarter of the 15th century, or immediately thereafter at the latest.