Madonna and Child Enthroned with St. Louis of Toulouse, St. Catherine of Alexandria, St. Anthony the Abbot and St. John the Baptist, 1380 c. 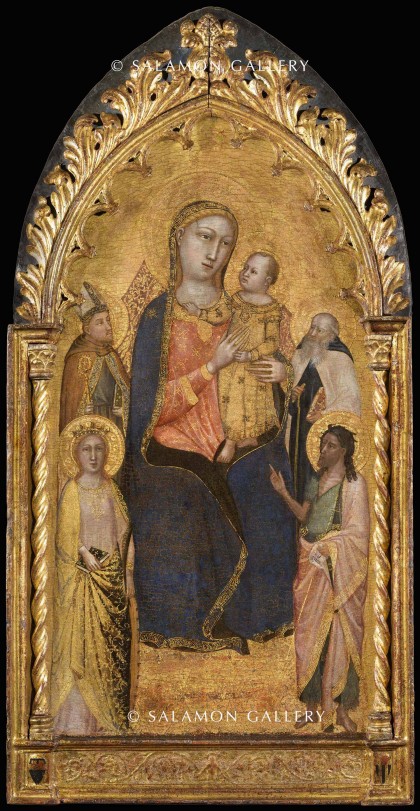 The Virgin is seated on a throne richly decorated with plant motifs, as we can see from the edges of the backrest visible in the space left free by the haloes; she holds the Christ Child in her soft embrace while he, standing, gazes deep in thought at his mother. On either side of the group, on two registers, we have St. Catherine of Alexandria, identified by her crown and her wheel, and a sainted young bishop, possibly St. Louis of Toulouse, on the left; and St. John the Baptist and St. Anthony the Abbot, the latter without his traditional 'Tantony' pig but identified by his long white beard and pilgrim's staff, on the right. The suspended pose of the holy group, seemingly hovering miraculously against the gold ground without resting on any foothold, is germane to the sense of a miraculous vision that clearly inspired the panel.

The painting is the central panel of a tabernacle whose doors have been lost. It was first studied by Hans Dietrich Gronau, who identified it in 1933 as belonging to the collection in the castle of Vincigliata, just outside Fiesole[1]. The castle had been restored in a neo-medieval style by John Temple Leader (1810 – 1903), a former British politician of some standing who had turned his back on his native land and moved to the hills around Florence to devote his energies to his passion for collecting art[2]. On his death in 1903 he left the castle, its furnishings and the paintings it held to the Third Baron Westbury, whose family held on to it until the outbreak of World War II. While there can be no absolute certainty as to which works formed part of Leader's original collection, this panel is highly likely to have been his inasmuch as it perfectly reflects the taste of the sophisticated gentleman he was: a man educated to appreciate the aesthetic value of late 14th century art in keeping with the precepts espoused by his friend John Ruskin and inclined towards rediscovering the devotional religious model most directly reflected in the years that followed the time of the Black Death.

In the second half of the 14th century there was a prevailing tendency in Florentine painting to move "from the narrative to the ritual" (as Millard Meiss put it[3]), and painters working at that time appear to have been aware of the new significance that art had acquired in the wake of an experience felt by many to herald the Day of Judgment. Here the profile of the Virgin, swathed in her voluminous blue mantle on a gold ground, reveals an approach that required any manifestation of the divine to shun all notion of sensibility. To the "real" space that Giotto and his immediate pupils had built with considerable nonchalance in their handling of perspective in earlier years, the artists born around the middle of the century responded with a deliberately "unreal" treatment of space, eliminating all hint of a setting that might drag the scene depicted back into the sordid world of men. The artist who produced this panel, clearly influenced by the style of the Orcagna brothers, appears to have fully comprehended the new perception of the significance of religious painting, a premise that is unquestionably the principal reason behind the work's historic value.

In his analysis of the picture, Gronau noted clear formal similarities with a stylistic group that he had reconstructed and attributed to the Florentine master Lorenzo di Bicci (c. 1350 – † after 1410)[4]. Lorenzo was known from the lengthy biography that Giorgio Vasari devoted to him at the end of the first part of his Lives of the Artists, yet that very biography had given rise to a misunderstanding which resulted in the merging of his personality with that of his son Bicci di Lorenzo[5]. Two different painters working over a period of some eighty years had thus been fused into a single figure. It fell to Giovanni Poggi to "separate" the two artists on the basis of documents relating to the commissions awarded to them by the Opera del Duomo[6]. The solution of the dilemma spawned a spate of monographic articles reconstructing Lorenzo's career, by Mario Salmi[7], Roberto Salvini[8], Gronau himself and Giulia Sinibaldi[9]. Our panel, which Gronau attributed to the early part of the master's career, was discussed once again with the correct attribution by Sinibaldi[10]before entering the accepted corpus of works by Lorenzo's hand drafted by Miklos Boskovits[11] and Richard Offner[12]. Gronau had earlier remarked that the panel was of considerable interest in that it showed the artist's proximity, at least in the early stages of his career, with the style of the Orcagna workshop, particularly with those of Nardo di Cione (and his Madonna and Child Enthroned with Four Saints now in the Brooklyn Museum of Art[13]) and of Niccolò di Tommaso[14]. Resorting to philological investigation, Gronau also detected a certain similarity with a large panel depicting St. Catherine of Alexandria with Six Virtues formerly in the von Hadeln collection in Florence and recently sold at auction in London[15]. This latter panel may belong to a later phase of the master's career, yet it reveals the same quality of draughtsmanship in the definition of the folds of the drapery and the same choice of composition tending to present sacred figures in a frontal, almost iconic manner in keeping with the tradition of the Orcagna workshop. Thus our own panel's echo of the work of Nardo and Iacopo di Cione appears clear, and yet in the jewel-like quality of the palette we can also detect a proximity with the manner of Agnolo Gaddi and, more generally, with the "courtly" trend in Tuscan painting that appeared in the last twenty years of the 14th century. So while he never betrayed the premises of his training, Lorenzo appears nonetheless to be a forward-thinking artist capable of interacting with the masters who were already turning towards the International Gothic in the late 1380s. The recovery of this work, lost in the 1940s but rediscovered today in perfect condition, testifies to a lively personality whom the archives, not without reason, show us to have one of the leading players in Florentine art in a period rife with commissions such as the last quarter of the 14th century.