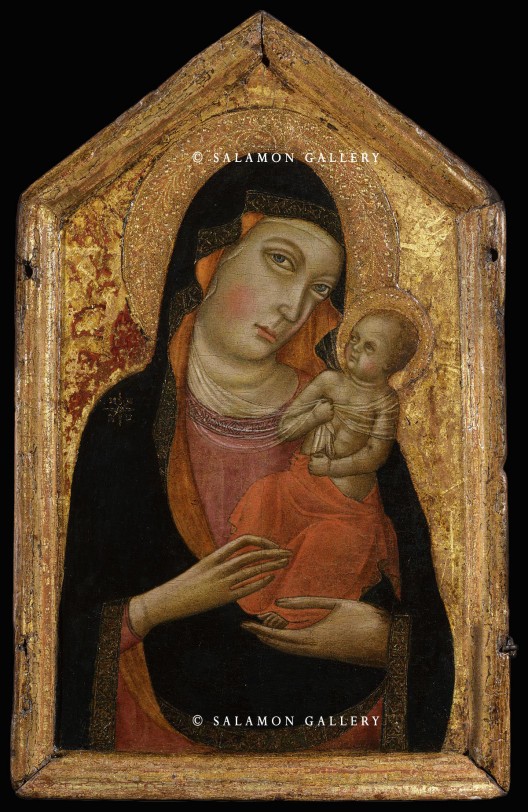 Our knowledge of this small panel [1] had been restricted hitherto to a report by Andrea De Marchi (1986, pp. 54, 55, fig.9) corroborated by an old and very small photograph – the same photograph to be found in factsheet no. 6932 in Federico Zeri's photographic library –, in which he attributes the painting beyond all doubt to the Master of 1310, the most important figure on the art scene in Pistoia (and indeed everything points to his being a native of that city) between the final years of the 13th century and c. 1330.  And as far as I have been able to discover, the only followup to De Marchi's report is a mention in a note by Enrica Neri Lusanna (1998, p. 303, note 75) (1). In any event, I had a copy of the old photograph in my folder on the Master and had reached the conclusion some time ago that the panel must be the earliest known example of this singular artist's work. Thus I was enormously intrigued by the picture's sudden reappearance at the end of 2020, when work was already well under way on the first major exhibition devoted to the medieval period in Pistoia. The painting had largely maintained its exquisite draughtsmanship and palette, and both have now been brought marvellously back to life by very successful restoration of a largely conservative nature (2). The faces and flesh of the figures show no major interference over the centuries, what little interference there has been being restricted to the halos which were presumably renovated some time between the late 14th and early 15th centuries through the addition of a new layer of gesso and glue. The sophistication of the new decoration with its pleasing plant motif [2] testifies to the devotion and respect still lavished on the precious panel at the time, and the back of the panel [3] was also renovated on that occasion, acquiring a pleasing decorative pattern of plaited ropes with frayed ends.

The painting, which consists of a single small poplar panel with vertical fibre, was the central part of a sophisticated portable tabernacle with doors, as we can clearly deduce from the notches for four hinges on the sides and from a surviving eye bottom right.

The Virgin, at once sweet-natured yet determined, is immediately appealing thanks to her blue eyes of rare intensity and power, instantly calling to mind the archaicising stylistic mood typical of so many images painted, particularly in central Italy, between the final years of the 13th century and the dawn of the 14th. The Virgin's left hand, with its characteristically pincerlike pose, is a feature closely comparable to the style of other artists working at that fateful turn of the 13th century such as the Master of Varlungo (reredoses in New Haven and formerly in the Fiammingo Collection in Rome, for which, see A. Tartuferi, La pittura a Firenze nel Duecento, Florence 1990, figs. 232-233), or a Madonna and Child whose current whereabouts are unknown but which originally came, in all likelihood, from the church of Sant'Andrea a Cerreto Maggio (Florence) and which Boskovits attributes to the Master of the San Quirico Crucifix (3).

Certain details in the painting instantly reveal the artist's uncommon talent, for example the Christ Child's gesture – relatively rare, but affected with a certain frequency by the Master of 1310 who repeats it in the eponymous altarpiece – as he firmly tugs on his mother's very fine, transparent veil, pulling it towards himself the better to wrap it around his shoulders, while still allowing us to distinguish the decoration on the neckline of her robe [4].

The motif was inspired by Duccio di Buoninsegna and can be found in his Madonnas in the Galleria Nazionale dell'Umbria in Perugia, in a triptych in the National Gallery in London and in the former Stoclet Madonna now in the Metropolitan Museum in New York. Moreover, it is significant that for this motif and for its translation into painting we can identify a particularly close parallel with the transparent veil in a picture by a very early follower of Duccio who, like the Master of 1310, also embarked on his career in the final decade of the 13th century. The picture in question is a Madonna and Child [5] by the Master of Città di Castello that is the central panel in a polyptych with St. Augustine, St. Paul, St. Peter and St. Anthony the Abbot now in the Pinacoteca Nazionale di Siena but originally from the Augustinian hermitage of Montespecchio, which was most likely completed by 1307, the year the church was reconsecrated (4), and in my view that early 13th century date tallies perfectly with the date of the Madonna under discussion here.

Yet the only date proposed hitherto – by De Marchi in 1986 (p.54) – was c. 1315, in other words midway between the eponymous altarpiece of 1310 now in Avignon [6] but possibly originally from the church of San Francesco in Pistoia, and a five-panel reredos in the Museo Civico in Pistoia from the church dedicated to St. Mary Magdalen in the Convent of the Umiliati, which can be dated to c.1320 (5).

The Madonna under discussion here, however, differs in its sturdier construction and, in particular, in its figures' more controlled expressions both from the Avignon Madonna and from the five-panel reredos in the museum in Pistoia – which have prompted descriptions that are possibly a little too fervent – although there are those who have underscored even in our picture the figures' "puffy, dazed eyes" and the "Christ Child's pugnacious gesture as he clutches the veil to his breast"(6). The strong chiaroscuro used to highlight the Virgin's neck recalls certain images of Mary from the last quarter of the 13th century, while the sternly compact forms and expressions reminiscent of Giotto stand comparison with, for example, a Madonna and Child by Lippo di Benivieni in a private collection [7], it too probably the central panel from a tabernacle and dated by Carlo Volpe to the dawn of the 14th century(7).

The panel that has now resurfaced and is once again available for study not only confirms, in my view, the superb level achieved in the earliest phase of what we know so far regarding this unknown artist's career, but it also allows us to define the boundaries of that career with greater precision. On the basis of meticulous stylistic research, we can state with some confidence that his career culminated in a frescoed heptaptych of the Madonna and Child Enthroned with Six Saints detached from the north wall of the church of San Domenico in Pistoia, reliably attributed to the Master by Donati (8) and datable to 1325–30, and in a sophisticated and eminently Gothic panel depicting Episodes from the Life of St. Irene [8] which is datable to some time around 1330 (9). In consideration of this peak of quality, it is rather hard to imagine that the Master's career may have extended into the 1340s or even into the middle of the century with such works as the pentaptych in the Pinacoteca in Empoli or the other in the Museo di Arte Sacra in Popiglio (10), not to mention the surviving fragment of a Madonna and Child identified in the Conservatorio della SS. Annunziata in Empoli, as has been recently suggested (11). While the attribution to a Master of 1336 proposed by Donati some time ago for the first two works now seems to need revising, the stylistic rapprochement retains its validity, and is in fact further borne out by the new paintings. The latter may in fact be attributed to another artist working in Pistoia and Empoli who, in seeking his inspiration in the pioneering work of the Master of 1310, has made a crucial contribution towards consolidating the concept of a "school of Pistoia" in the first half of the 14th century that also embraced the teachings of Maso di Banco, introduced into the city thanks chiefly to the work of Bonaccorso di Cino.