The Feast of the Gods 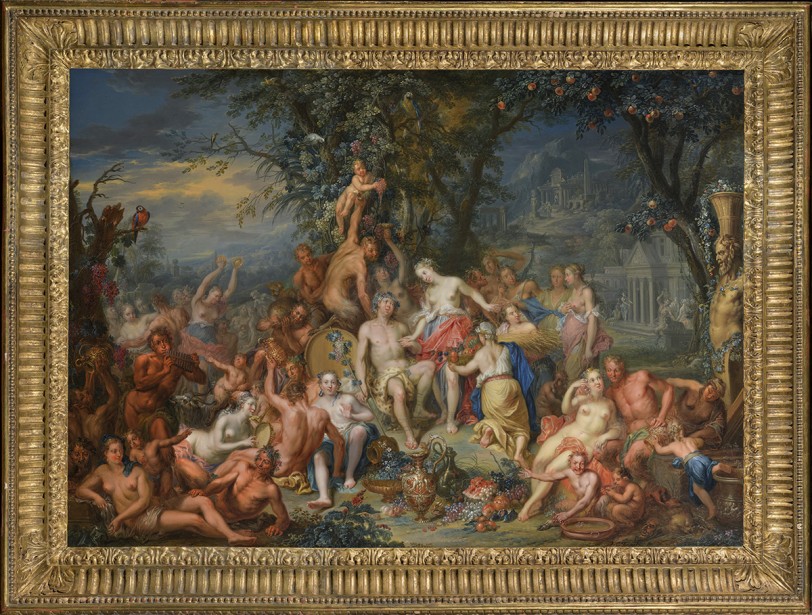 Franz Christoph Janneck was born in Graz but by 1730 he had established himself in Vienna and studied at the Academy. He later became assessor there from 1752 until 1758. His oeuvre comprises mainly cabinet pictures of conversation pieces as well as landscape, religious and mythological scenes. These, such as the present painting were often painted on polished copper which enabled the artist to achieve a great degree of finish and detail. Our composition can be compared to his fetes galantesscenes, which are considered among his finest achievements and are some of the best examples of Austrian rococo and are principally inspired by the French rococo, notably the work of Antoine Watteau (1674-1749). However, his meticulous technique and predilection for copper as a support also reveals a clear debt to the Leiden fijnschilder tradition.

The origins of the pictorial tradition of the love garden can be traced to medieval manuscript illustrations and representations of the hortus conclusus(the enclosed garden). In the late sixteenth and early seventeenth century, Flemish artists like Hans Bol and Louis de Caullery depicted elegant figures in love gardens or imaginary park-like landscapes. The theme gained in popularity with the first generation of Dutch high-life genre painters, David Vinckboons, Willem Buytewech, Esaias van de Velde, and others, who made a speciality of such garden parties (buitenpartijen). The present scene can be considered a garden party: a young Bacchus is seated at the centre of the composition, wearing a crown of grapes surrounded by semi-naked nymphs and satyrs who are playing music and drinking wine, in a secluded spot with fruit trees and parrots, Roman buildings in the background. The composition is constructed in a pyramidal way so that the eye of the viewer falls directly to the centre.

The scene is reminiscent of another scene by the artist, depicting a fete galante, in a private collection, where one finds the same motifs of an enchanted world, where the protagonists take part in the same game of love, music and pleasure. The brilliance of the colours and the delicacy of Janneck’s touch perfectly capture the spirit of the rococo.