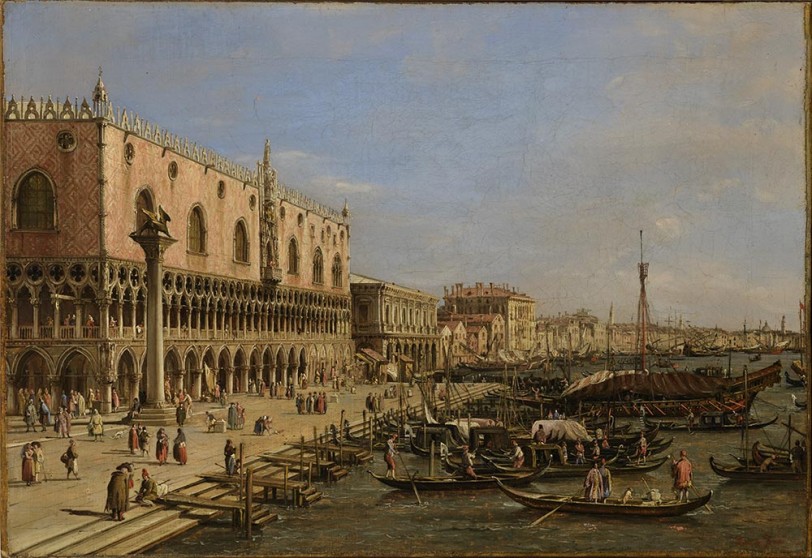 These paintings show a space arranged only indirectly upon similar versions by Canaletto, engraved with a burin and published in the work Urbis Venetiarum prospectus celebriores (Venice, 1742) by Antonio Visentini, where there is no trace of any building modifications that had taken place in the meantime between the churches of the Scalzi and Santa Lucia, shown to the right in the first work.

These are, instead, promptly recorded in the printed version by Michele Marieschi called Canal Grande at the Scalzi, part of the Magnificentiores, Selectioresque Urbis Venetiarum Prospectus collection (1741), where the artist signs with “Venetus Pictor, et Architectus”.

The reconstruction by Federico Montecuccoli degli Erri is well known (F. Montecuccoli degli Erri – F. Pedrocco, Michele Marieschi. La vita, l’ambiente, l’opera, Milan, 1999); he showed the path of such an 18thcentury circulation, that saw a long distribution until Joseph Wagner’s edition in the 1780s. The image could have come under the availability of Francesco Guardi until the death of Marieschi in January 1743, that is for about a year from the printing privilege, subsequently until 1751 with the rights of his wife Angela Fontana and until 1757 with those of the painter Francesco Albotto.

The theatrical connotation of this view had seen some attempts on canvas conceived by the same Marieschi around 1740 – that is what can be concluded from the most reliable sources (summed up by Montecuccoli degli Erri – Pedrocco, Michele Marieschi…ibid., pp. 386,387); this can be identified in the work in a Milan private collection and the one at the Philadelphia Museum of Art, where Giannantonio Guardi allegedly carried out the figures.

The gaze is brought towards the Church of the Scalzi to the right, close to the church of Santa Lucia, while the profile of San Simeone Piccolo’s church is to the left, the work of the architect Giovanni Antonio Scalfarotto, built in the 1720s and consecrated in 1738.

The other canvas shows perspective starting from the left with the stark presence of Palazzo Ducale, then the Prisons and San Biagio is at the end. A traditional market place of Dalmatian people who came from the province of the Republic (Schiavoni) in the Napoleonic era, it became the most treasured stroll in the city with the opening of the public gardens, granting views onto the lagoon basin.

The Paglia Bridge, between Palazzo Ducale and the Prisons, was transformed in 1843-44, gas lamps were placed on the shore and some fenced vegetable gardens, that were once closer, were destroyed by a storm in 1838.

Francesco Zanin is oblivious to all this and signs the work as Zanin Fran:co; the Venice he portrays belongs to the past, as if time had taken it away from him. He shows us a grandly unchanging city, with its long-established life and painterly discipline, modelled on the great landscape artists of the Settecento. Tears never seemed to stop flowing for some people, such as Pompeo Gherardo Molmenti, who lamented the lost glory of Venice in his studies and writings – and this had thus become the lyrical image of Venice, looked at like a lady replete with a mournful countenance, during the Austrian domination. The output of a painter like Zanin seems to appeal to us more: a touch of his brushstroke is all it takes to transform a dead figure into the airy lightness of an unforgettable day spent in the city of dreams.

Furthermore, he takes care of memory, in addition to giving life to a highly golden Venetian world, that is why he systematically defines his works with progressive numbers – as is our case – contributing to the creation of a genuine artist’s repertoire. Here, in particular, leaving no room for doubts, he offers us an image of the Scalzi area where the memory of the church of Santa Lucia comes from its 1863 demolition, carried out to leave room for the railway station, most certainly a symbol of modernity and of the connection between the island and the mainland: the latter would have overturned the classic relationship with the city, but would have also allowed the tourist industry to flourish – and we can see blatant traces to this day – this way renovating the myth of Venice seen from another point of view.

I am certain that Francesco Zanin remained close to the beloved city he had chosen to live in, coming from the Bassano area, his portrayal austere to some extent, considering the historic dimension of the representation, taking advantage of a new opening up to the world that was being crafted with the annexation to the Kingdom of Italy. I believe this pair of paintings, radiating an extraordinary quality, is a testimony dating to the late 1860s.  That was a triumphal time for sketches from the Lagoon, a lateral genre as this landscape seems to pursue, featuring honesty by trade, in an independent path to realism, all merging in Francesco Zanin, as if this could qualify him as the new XIX century Canaletto. To this day, this is a most pleasing work.

I already had the chance to show that associating the engraving of Canaletto to the scenographic frame of the Venetian architecture conceived by Francesco Zanin is rather easy. In addition to the deployment of prints from the subjects of the greatest Venetian landscape painter, however, a new attention may have sparked from the sale of paintings believed to belong to Canaletto’s time, in Venice, which have now been identified as the work of Michele Marieschi in the version of the Stuttgart Staatsgalerie. They were part of the collection of the artist Michelangelo Barbini, who passed away in 1843, and were bought by the German king William I of Württembergbetween 1850 and 1852. Possibly driven by the haste of the sale, it was commented and published by Francesco Zanotto in 1847 (Pinacoteca Barbini Breganze dichiarata con note illustrative da Francesco Zanotto, Venice 1847) and in a second edition in 1850.

Perhaps the fame of the group of landscapes, at the time believed to be by Canaletto, miserably ready to be sold, may have guided the young Zanin in keeping the memory at the beginning of the 1850s and, were that the case, it would be one of the first exercises of the artist, that he would have subsequently repeated several times.

The relationship between Francesco Zanin and his spirit guide is at times moving, to such an extent that he can be considered the most sentimental and incurable keeper of the Canaletto memory (albeit perhaps a little pathetic in his replicating works which look like fakes, in an era of re-evaluation of old masters and XVIII century interior design), as was the case when he devoted himself to the theme of the Settecento Venetian Feast with his The Return of the Bucintoro at the Pier on Ascension Day(F. Magani, La Venezia dei Grubacs, Treviso 2017, fig.19), gleaming with vivid colours and known in several editions.

What’s more, Zanin carried out the copy of the Portico in perspective(Venice, Gallerie dell’Accademia) in 1863, exactly one century after the academic annexation of the great landscape painter, and that had been his entrance gift.

This was one of the few paintings by Canaletto which could be seen in Venice, that the restorer Pietro Edwards  had accepted at the Accademia on 28 April 1807, where the Rio of the beggars and the School of San Marcohad entered in 1856, with the purchase arranged by Emperor Francis Joseph from the renowned Manfrin Collection, a painting believed to be by Canaletto at the time, subsequently becoming an autograph work by his nephew Bellotto. Incidentally, our Francesco Zanin executed about forty copies from this painting, to keep his exercising going.

A step back in time, as if the confrontation and the traditional image of that artist and his century were still alive.

Each figure in our paintings represents a typology, as Canaletto would have taught; these figures were vital to the flair of the mise-en-scène.Perhaps a little less blatant than in other works – such as the Celebrations for the new aqueduct in St. Mark’s Square (Private collection), which records the 1877 event with the precision of a report. All in all, Zanin keeps modern, softly bringing in minor changes to tradition; consider the correctness of drawing, where even minute elements are aptly recorded, his keenness on details, the way he endorses the point of view, making the main event lateral and peculiar – I go back to what I believed to be critically valid, i.e. F. Magani, Francesco Zanin. Un “Canaletto” dell’Ottocento, Milan 2008).

I am still spellbound by the simplicity with which this master can renew the quality that had made the Venetian landscape painting of the past century great, thanks to a smooth and exact touch of the lagoon scenic design, combined with clear light in the silky airiness of the sky.

Francesco Zanin and Giovanni Grubacs demonstrate how the reinterpretation of XVIII models is put forward in the Lagoon in the Ottocento with the dignity crafted when looking for new effects and specific moods. The landscape, or better said the perspectivegenre, was supported by a specific class of academic teaching.

And yet there appeared concessions to traditions, albeit featuring the scientificcuriosity, typical of their times; the brushstroke of Zanin and Grubacs records the cadence and the diverse qualities of light, that is the scenic illumination of Venice.

The vivid descriptiveness of the two paintings embodies the heritage of tradition, reinterpreted with a feeling of ephemeral essence of reality: it is in fact in harmony with the will to remember pleasant moments belonging to the Venice of the past: a street homage to a late romantic sensibility, still beaming with life in the second half of the XIX century.