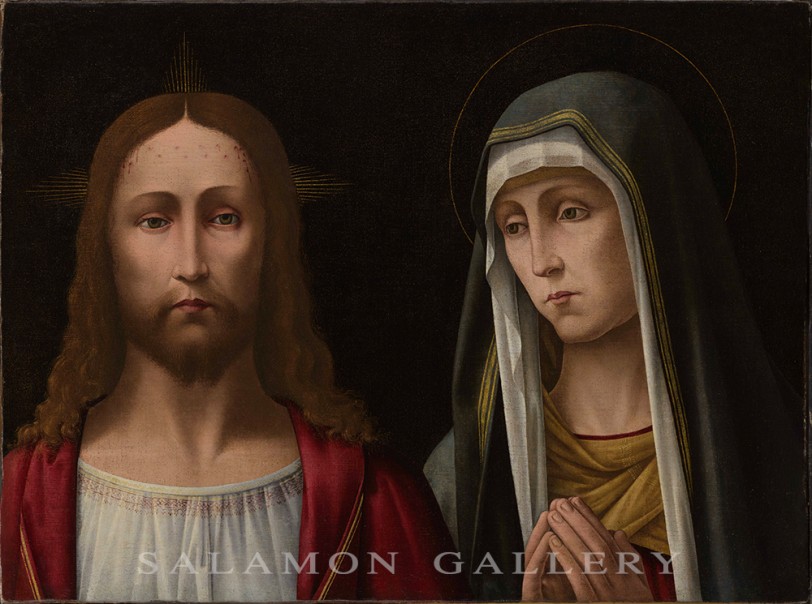 Christ is portrayed frontally, wearing a red mantle on a white gown, his attentive gaze directed at the observer; the Virgin, shown in three-quarter profile, wearing a mantle that covers her head, as well, is at his side, her hands joined in prayer. The pose of Christ is reminiscent of the common iconography of the Redeemer – that is his Appearance to the apostles after his death. Notwithstanding, the presence of wounds on his forehead, some of which are still open with the blood flowing, exuding the agony of a crown of thorns, recalls the human nature of the Son of God and not his celestial one; consequently, he is still described as a Man of Sorrows,even though the miracle of the resurrection has taken place.

The presence of Mary undoubtedly emphasises this interpretation, her gaze afflicted, but at the same time aware that her son must sacrifice himself for the sake of the entire humanity.

The composition portraying Christ and the Virgin at half-length, the former from the front and the latter in three-quarter profile, stems from early XV century Flemish painting.

Robert Campin – the artist whom is usually attributed the catalogue of works formerly ascribed to the anonymous Master of Flémalle – offered the first remarkable example in the diptych (cut off in the lower part) now at the Philadelphia Museum of Art[i]. This work obtained extensive success, as seen in the frequent copies that emerged from the mid-Quattrocento onwards and the touching interpretation of the same subject carried out by Quinten Massys at the end of the century – in a diptych known for the many workshop copies, the most famous of which is certainly the one at the National Gallery in London[ii].   This subject hence became extensively widespread in Flanders, and Flemish paintings of the XV century were not confined to their place of origin, but often travelled, especially by sea, being popular with collectors and merchants in all European harbours. Venice was the obvious approach for panels and art objects: it was, in fact, the biggest trading post in the Mediterranean, a melting pot of diverse, distant languages and cultures ever since the Middle Ages. Like the harbours in the Iberian Peninsula, Venice became the preferred venue for the collection of Flemish art, with obvious consequences on the formal shaping of the artists born in the lagoon and the mainland.

Francesco Bissolo is a painter from Treviso who trained in the workshop of Girolamo da Treviso il Vecchio and subsequently in the much more prestigious workshop of Giovanni Bellini[iii]. In fact, he is documented in the entourage of Bellini in Venice in 1492, when he was about twenty, in the decorative site for the Sala del Maggior Consiglio at Palazzo Ducale[iv]. During this time, however, Bissolo earns his living as a talented gilder, a profession he would carry on alongside that of painter for a long time. The first documents related to his painterly activity are dated after the turn of the century; strongly influenced by Bellini, his output is only diluted by short, consistent notations derived from Vittore Carpaccio – as is evident in the sections of the polyptych depicting Saint Augustine, Stephen and Nicola from Tolentino, now at the Pinacoteca di Brera in Milan, but stemming from the School of Saint Stephen in Venice, clearly executed at a time when Carpaccio was working at the canvasses of the Sala Maggiore in the same building[v]. Around 1510, however, Bissolo’s style changed radically: memories of Antonello and Cima da Conegliano are integrated in a grammar in which the impressions of Giorgione’s and Dürer’s portraits begin to leave their marks. In the altarpiece portraying the Transfiguration, formerly in the Saint Mary Mater Domini church in Venice and now at the Gallerie dell’Accademia, the definition of the scene borrowed from Bellini is combined with facial notations revealing Dürer-style features, which also hint that the artist may have known Lorenzo Lotto’s early works. A series of half-length portrait figure compositions belong to the same phase: Sacred Conversations, but also paintings depicting Christ giving his Blessing among Saints: these works are suspended between old and new concepts, where a modern, tonal handling of shadows is combined with Quattrocento references in the poses, hinting at the study of Giorgione’s masterpieces[vi].

The present painting is a fine piece of work belonging to this phase: memories of the time spent in Treviso and the Veneto inland are still visible in the artist’s output – cases in point are the several editions of Christ giving his Blessingor Salvator Mundicarried out by Jacopo da Valenza. Bellini, however, strongly influences the physiognomy of the portraits – Christ, in particular, is reminiscent of the figure of the Saviour giving his Blessing, whose prototype was in the School of Saint Stephen, known to us only through good copies from the workshop of Giovanni[vii]- albeit displaying an even more natural rendering than what the great Venetian master was capable of achieving. It would appear that Bissolo may want to outdo Bellini, precisely by applying the lenticular precision of Northern masters: the folds of the garments do not present the graphic stiffness typical of Mantegna anymore, thus attesting how the painter would move at ease in the climate of the late Renaissance. Powerful portraits, based on the models of Flemish painters and Antonello da Messina, lead to the character of a master often underestimated by modern critics; instead, he should be appreciated as a talented protagonist of the arts in the early Cinquecento in the Venetian lagoon. Paintings like the present one exude a value that reveals how the legacy of Giorgione, from the last phase of Bellini’s production to the modern manner of the young Titian, was not intended as the only possible solution in Venice. In other words, the multi-faceted heritage of the Quattrocento could not dissolve in the blink of an eye. Bissolo, together with other great masters of his generation, did affirm the rich value of a school that had always been open to numerous, enlightened influences.

[vi]For an overview on this production by Bissolo, see the Berenson indexes, as well as a somewhat recent study by Anchise Tempestini on the painters from Treviso, who had trained with Bellini: B. Berenson, Italian pictures of the Renaissance. A list of the principal artists and their works. Venetian school, London 1957, I, pp. 39-41; A. Tempestini, I collaboratori di Giovanni Bellini, in “Saggi e memorie di storia dell’arte”, 33, 2009, pp. 21-107 (pp.41-47).