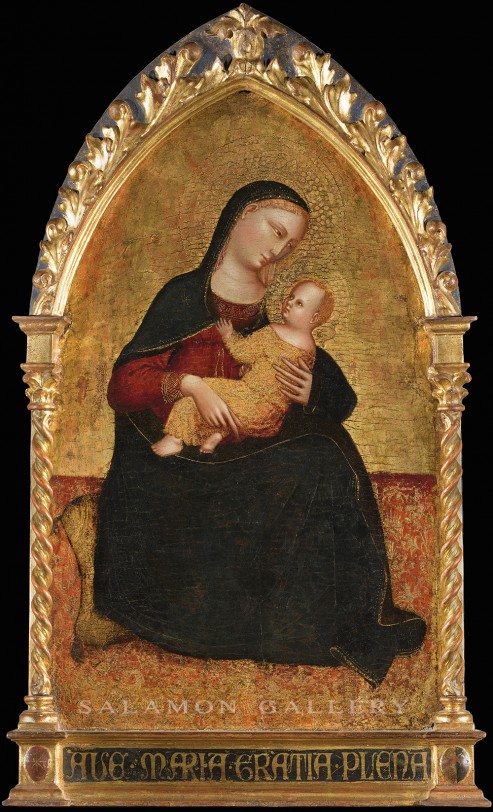 The artist seems to have commenced his activity in Orcagna’s entourage still in the 1360s, becoming the head of one of the busiest workshops in the city in the final decades of the fourteenth century and the beginning of the fifteenth. Head of a family of three generations of painters (he was the father of Bicci di Lorenzo and the grandfather of Neri di Bicci), Lorenzo passed on to them a whole body of technical ability and formal repertory acquired during long practice in his rather traditionally oriented workshop. After the death of Orcagna he must have had contacts with Jacopo di Cione; the influence of the latter's style is, indeed, apparent in the painter's first documented work, the panel with Saint Martin Enthroned and, in the predella, the Liberality of Saint Martin (Florence, Galleria dell'Accademia), intended for the pier of the Arte dei Vinattieri in the church of Orsanmichele, immediately after 1380. The Opera di Santa Maria del Fiore ordered from Lorenzo, Agnolo Gaddi and Spinello Aretino, drawings for the marble statues of four Apostles to be placed on the facade of the Cathedral (1387), which were subsequently sculpted by Piero di Giovanni Tedesco. In 1398, the artist painted four polylobed panels with the Evangelists for the tabernacle of the MaÄ'onna delle Grazie, also in the Cathedral (the panels depicting John, Mark and Matthew are still preserved in the Museo dell'Opera del Duomo).

The painter was also active in Empoli, where the Compagnia della Croce at the church of Santo Stefano commissioned a triptych from him in 1399, of which only the central panel with the Crucifixion remains. Around the same time he painted the panel with the Virgin of the Assumption Handing her Girdle to Saint Thomas for the same church. The somewhat wooden figures no longer have the delicate chiaroscuro modeling of Lorenzo's earlier works, but reflect the neo-Giottesque orientation of part of the Florentine painters of the period. A triptych, of somewhat later date, now conserved - together with the two other paintings - in the Museo della Collegiata di Sant'Andrea in Empoli exemplifies, however, some prudent research of elegance moving closer to the late Gothic standards. Lorenzo populates his compositions with more agile and more graceful figures, as also seen in the Triptych divided between a private collection (for merly London, Drey collection) and the Museo Nazionale di San Matteo in Pisa. In the first decade of the fifteenth century the direction of the workshop passed to Lorenzo's son Bicci, who had probably been working under his father's guidance for quite some time. In the early years of the new century father and son executed together some important commissions of sustained qualitative levels, such as the frescoed tabernacle known as the Madonnone (now in the church of San Michele a San Salvi, Florence). By 1427, Lorenzo is recorded as already deceased.

The small panel, enclosed in a frame with gilded stucco decoration, shows the Virgin Mary seated on a cushion on the ground, inclining her head sweetly towards her Son, cradled in his Mother's arms. With a slight turning of his head in relation to his body, seen from behind, the infant Jesus returns his Mother's gaze and clutches a fold of her cloak with his left hand. The Child's tunic, girdled at the waist and with an ample neck line that leaves the shoulders partially uncovered, is enriched with minute decoration. The Virgin wears the usual red dress beneath a blue cloak that completely envelops her figure. The pavement is covered with a red cloth decorated by sgraffito technique with stylized leaves and flowers, and with birds with open wings, similar to those on the cloth covering the throne of Saint Martin, in the panel executed by Lorenzo for the Arte dei Vinat tieri in the church of Orsanmichele soon after 1380.The halos of both figures have punched decoration with simple roundels, within granulated bands.

This small panel was first published by Raimond van Marle (1927), as the work of the "School of Gentile da Fabriano," belonging to the collection of Prince Fabrizio Massimo in Rome. The ascription of the painting, if not directly to Lorenzo at least to his circle in the early fifteenth century, is due to Brigitte Klesse (1967), while Miklós Boskovits (1975) regarded it as an autograph work by the painter, and dated it to the years 1375-1380. In an appendix to the Corpus of Florentine Painting, which gathers the attributions of Richard Offner (1981), this Virgin of Humility is listed among Lorenzo's works. On the other hand, an improbable ascription to the circle of Jacobello del Fiore is given in Christie's sale catalogue in Rome, where the painting appeared on 18 June 2002.

A group of small paintings intended for private devotion and representing the Virgin of Humility may be referred to the painter's early career. Resemblances with our painting are to be noted, for example, in the Virgin of Humility in Nashville (Tennessee; George Peabody College), in other versions of the composition in Chicago (The Art Institute), formerly in Milan at Finarte and formerly in Florence in the collection of Luigi Grassi (circa 1962). A further panel of the same subject at one time in the collection of Jean-Alex is François Artaud de Montor in Paris, known from the engraving in the catalogue, was ascribed to Lorenzo di Bicci by Klara Steinweg.  An effect of decorative richness is conferred on these paintings by the embroidered cloths covering cushions and floors, or, as in the case of the Virgin formerly in the Grassi collection, filling the entire background. The precision of drawing and the accuracy of the modeling that characterize the series is indicative of the artist's high technical abilities.

One might add that this Virgin of Humility is the only one in the group to show the motif of the interchange of glances between the Mother and the Son, with its distinctive note of emotional intimacy, less evident the other panels in the group. The lively torsion in the pose of the Child is not uncommon in the Florentine workshop tradition, and Lorenzo could have borrowed the motif either from prototypes of Bernardo Daddi (Cambridge, Massachusetts, Fogg Art Museum, no. 1923.35), or from more recent examples by Puccio di Simone, such as the Triptych with the Virgin of Humility of the Trinity Cathedral in Cleveland, Ohio (now in The Cleveland Museum of Art).

The marked chiaroscuro modeling of the faces of the two personages, with their minutely depicted lineaments, may be a clue to the dating of our panel just prior to 1380: this aspect is less accentuated in the possibly earlier members of the group of devotional paintings mentioned above (e.g, in Nashville and formerly in Milan). The strong emphasis of relief effects connects the here-discussed painting, however, with the Virgin formerly in the Grassi collection and with the one in Chicago, in accordance with the manner that the painter also would adopt, on a larger scale, for the Saint Martin for Orsanmichele. Fondness for a dense and substantial modeling links the art of Lorenzo with that of the Master of the San Niccolò Altarpiece, as appears from his eponymous work, in the church of San Niccolò in Florence presumably painted, too, no later than 1380.The close stylistic relations between these painters, first noted by Federico Zeri, have subsequently been emphasized by Erling S. Skaug, in connection with the use by the two painters of similar punch marks.

Compared with the production of large-size altarpieces - several of which were realized by Lorenzo up until the end of his career, working for patrons in Florence and its environs, adopting formulas strongly linked to the pictorial tradition of the years around and shortly after the mid-fourteenth century – his devotional paintings are generally characterized by tones of more lively expressivity. Lorenzo gathers and develops models preferably chosen from the figurative repertory of the Orcagna workshop, paying particular attention to the production of the young Jacopo di Cione, as is shown by his care for elaborate decorative details.

1 This gesture underlines the intimacy between Mother and Child; see Shorr 1954, pp. 56-57.
2 For a description of the decorative motifs of the cloth on which the Virgin is sitting in this painting, see Klesse 1967, p. 363 (see also note 8 below).
3 For the punch marks used by the artist, especially