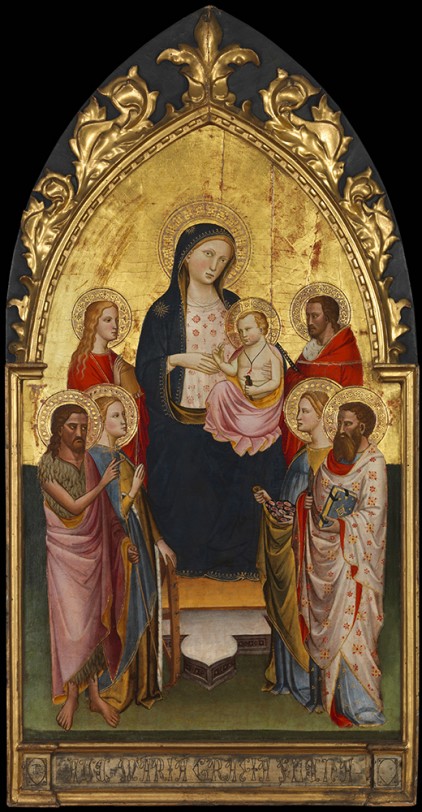 We would like to thank Prof. Angelo Tartuferi for his help in studying the painting and for confirming the attribution to Ventura di Moro.

The Virgin is depicted seated on the throne, Her head in three-quarter view and the Child on Her lap; She gazes towards the observer. The Child’s right hand is raised in the sign of blessing and the left hand holds a goldfinch. The goldfinch is associated with the crown of thorns because of the thistle flowers it eats, a clear prefiguration of the Passion. On the left side of the Holy family, from top to bottom, are Saints Mary Magdalene, recognisable from the ointment jar, Catherine of Alexandria, with the wheel symbolizing her martyrdom, and John the Baptist, who indicates the Saviour; on the right side, Saints Julian the Hospitaller with his sword, Dorothea with a flower bouquet in her mantle, and Bartholomew with the knife of martyrdom. These Saints were all quite commonly worshipped, except for Julian, whose figure was connected to hospitals and charities – as he was famous for having saved the life of a leper who turned out to be a divine messenger.

Due to its sizes, we believe that this panel was intended for a small altar in a church, or an oratory. Recently, Angelo Tartuferi confirmed the attribution to Ventura di Moro, the Florentine painter active throughout most of the 15thcentury[i]. On a previous occasion (Etude Couturier Nicolay, Tableaux anciens et du XIXe siècle. Meubles et Objets d’art, Drouot Richelieu, Parigi, 15/12/1992, lot 40), the painting was sold as a work by the Pseudo Ambrogio di Baldese[ii], an anonymous Florentine painter Enzo Carli connected to the personality of Ventura[iii]. More recently, documents identified him with Lippo di Andrea di Lippo (Florence, circa 1370 - before 1451), who was active before Ventura. The similarities between these two Masters, whose stylistic oeuvreshave not yet been coherently defined, and the debated identification of the Pseudo Ambrogio, forces us to consider the critical literature concerning the two artists, as they perfectly embody the pivotal artistic passage from the Late Gothic Age to the Renaissance in Florence.

Raimond Van Marle proposed the name of the “Pseudo Ambrogio di Baldese” and ascribed to him the group of paintings Osvald Sirén had previously attributed to the 14thcentury master Ambrogio di Baldese. In fact, these works featured Late Gothic elements and, therefore, could not have been located before the turn of the century[iv]. After Richard Offner, Carlo Volpe, and Federico Zeri included in this stylistic group a large number of paintings[v], Enzo Carli suggested to identify this painter as Ventura di Moro, since he connected Ventura’s signed panel of the Pinacoteca Nazionale in Siena with the oeuvre of the Pseudo-Ambrogio[vi]. Later, Serena Padovani analysed the documents regarding the commission of the frescoes of the Nerli Chapel in the Church of Santa Maria del Carmine in Florence, whose style has been attributed to that of the Pseudo-Ambrogio since the years of Van Marle, and identified the anonymous Master with Lippo di Andrea di Lippo[vii]. Upon studying the documents, scholars identified the stylistic groups of the two painters in two considerably different periods: Lippo d’Andrea was active in the years of the Florentine Late Gothic Age, mainly in contact with Lorenzo Monaco and Mariotto di Nardo; Ventura di Moro, born at the turn of the century, trained in the same context, but was active throughout the 15thcentury, interpreting the innovations of the Renaissance through the modulate manner of Masolino and, later, Rossello di Jacopo Franchi.

Therefore, Ventura was recognised in a context influenced by the figurative experiences of Masaccio, Beato Angelico and Filippo Lippi, despite the fact that he maintained a proudly antimodernist manner that re-proposed 14thcentury models and embodied the linear structure of Late Gothic Age. This style must have been appreciated until the mid-century because Ventura and Rossello di Jacopo Franchi were commissioned in 1446 to paint the frescoes depicting the Stories of Saint Peter for the façade of the Palazzo del Bigallo in Florence[viii]; after years of training with provincial, yet stimulating, masters active in the regions of Chianti and Valdarno, such as the anonymous painter known as the Master of 1419, the painter is in the mature phase of his career[ix].

The early works, as seen in our panel, represent the most authentic and spontaneous phase of Ventura’s poetics. They still are pronouncedly Late Gothic, yet reveal the sense of monumentality typical of the 14thcentury, and especially present in Giotto’s work. In our painting, the Holy group visibly recalls the Madonna and Child of the Museo Civico in Pescia, which in turn can be associated with the earlier Madonna of the Parish church di San Leolino in Panzano in Chianti (near Florence)[x], a fundamental work in the painter’s transition towards Masolino’s models. With regards to the other figures of our painting, the Saints can be associated with the triptych that is part of the collections of the Museo Civico d’Arte Sacra in Colle Val d’Elsa. Particularly, Saint Bartholomew’s mantle is decorated with the same motifs[xi]. These works were painted around 1430, when Ventura progressively detached himself from the legacy of Lippo d’Andrea and the painters of the Chianti region (the so-called Master of 1416 and Master of 1419). He adapted his style to a more solemn manner, which could captivate the Florentine patrons. The artist respectfully honours models from the past in a remarkable way. This can be seen in the similarities between the Holy family and the profiles of the Saints of our panel with firstly the round and noble shapes of the physiognomies of Taddeo and Agnolo Gaddi, secondly the chromatic elegance of Mariotto di Nardo, and lastly the severe frontality characterizing the Florentine Masters of the second half of the 14thcentury. By now, Ventura is a mature artist, capable of interpreting the shapes of the past and aware of the historical value of the tradition.

Therefore, our panel is a new example of persistency and awareness of Florentine painting between the 14thand the 15thcentury, a civilisation that remained lively in a deeply transformed cultural context. In fact, by 1430 the frescoes of the Brancacci Chapel had been completed and Angelico was about to paint his masterpieces of the convent of San Marco in Florence. Therefore, this panel is not just valuable for being a precious (and perfectly preserved) 15thcentury Tuscan work, but also it is a historical document that offers unprecedented means to understand one of the most important passages of Italian art history, according to the famous concept of monumento/documentoJacques Le Goff formulated 40 years ago[xii].

[ii]The sale catalogue contained the quite interesting comparison with the panel depicting the Madonna and Child with Saints Mary Magdalene and John the Baptistof the Museum of Fine Arts in Boston (inv. 03.564). Although today an attribution to Lippo di Andrea is supported, after Lawrence B. Kanter’s state, there are visible similarities between the panel and the triptych with the Madonna and Child seated on a Throne with Saints Anthony Abbot and Peter of the Pieve di Santa Maria in Dicomano, a triptych that is usually assigned to Ventura di Moro: L. B. Kanter, Italian paintings in the Museum of Fine Arts, Boston, I, 13th – 15th century, Boston 1994, p. 139, n. 33; S. Albertazzi, in Bagliori dorati. Il Gotico Internazionale a Firenze 1375-1440, edited A. Tartuferi, exhibition catalogue (Florence, Galleria degli Uffizi, 19/6 – 4/11/2012), Florence 2012, pp. 230-231, n. 66.