Master of the Scandicci Lamentation 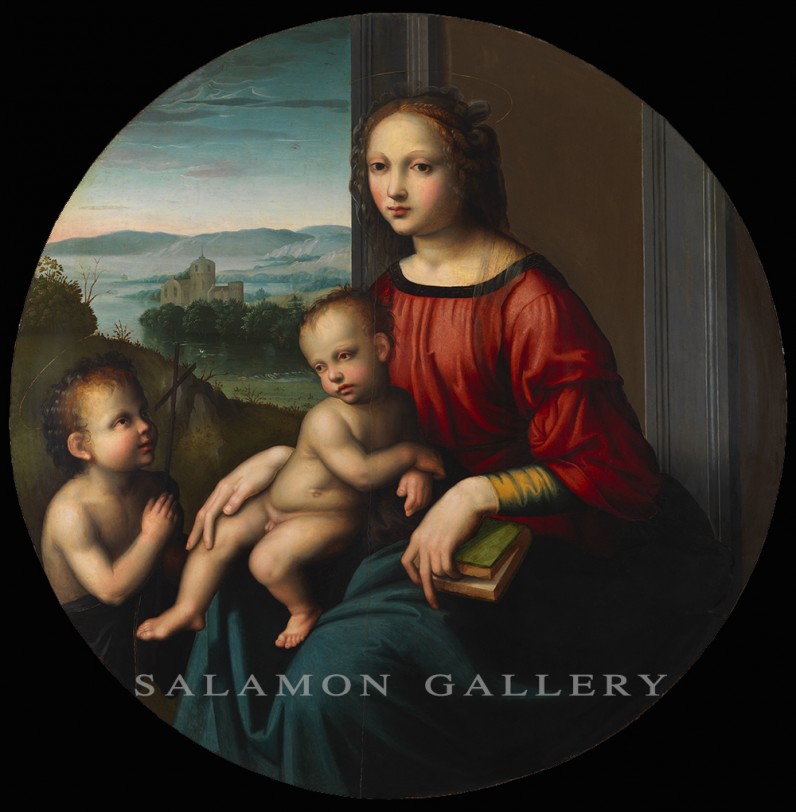 The Virgin, depicted with a book, a canonical attribution, holds the Child on her lap in an indoor scene; an open door to the left reveals a beautiful landscape with a river; the young Saint John the Baptist prays and looks at the Redeemer with a moved and enraptured gaze.

This sumptuous ‘tondo’, an impressive example of the artistic culture in Florence at the beginning of the XVI century, has passed from one remarkable collection to another: it was at first part of the collection of Antonio Scarpa (Motta di Livenza, 1752 – Pavia, 1832), doctor, anatomist and professor of surgery at the University of Pavia, and great collector of Italian Renaissance and Baroque painting. Friend of Alessandro Volta, with whom he often stayed for long times in European courts, he became so successful that he was awarded with the Légion d’honneur in Paris – despite being politically far from Napoleon’s party – and was elected a member of the Royal Society in London[i]. He had arranged that, upon his death, the paintings of his collection would be displayed in a public museum in Motta di Livenza, his hometown near Treviso. The museum opened in 1844 with many masterpieces, such as Mantegna’s Saint Sebastian, today in the Franchetti Gallery at the Ca’ d’Oro in Venice, Sebastiano del Piombo’s Portrait of a Man, later purchased by the Szépmuvészeti Múzeum in Budapest, and two panels by Gaudenzio Ferrari – Saint Andrew and Christ Rising from the Tomb – purchased at the end of the XIX century by the National Gallery in London. The fourteenth item list in the first version of the collection’s catalogue, written in 1859[ii], reads: “Sanzio Raffaello. The Blessed Virgin with the Child and the Young Saint John – on an oval panel – 0.83 m H 0.86  m. W, with gilded frame. We have reason to believe that this work should can be included amongst the Second manner of this great Artist. We can therefore include it, and with no doubt, in the School of Raphael”. The author of this text expresses doubts on the inclusion of our panel amongst the works of the mature Raphael, suggesting it might likely be a painting of the school of the master from Urbino. The second catalogue – written in 1872, three years after the moving of the museum to the former convent of Santa Maria delle Grazie in Motta – reveals the same attribution.  However, we know from documents that, in the meantime, another attribution to Ridolfo del Ghirlandaio had been suggested by Otto Mündler, who visited the Pinacoteca in 1855[iii]. Mündler’s proposal was disregarded by Pompeo Molmenti, when he mentioned the painting in a 1874 register of the collection published in the “Archivio Veneto” magazine, still attributing it to the School of Raphael[iv]. In 1895, the Pinacoteca’s whole collection was auctioned at the Milanese gallery of Giulio Sambon[v]: our painting was the fifty-third item listed on the French auction catalogue and was defined as a “Magnifique exemplaire d’un brillant couleur”. Yet, on the same occasion the ‘tondo’ was demoted to being a copy of an original by Raphael, which Sambon identified in the panel previously in the collection of the Esterházy princes that had just been purchased by the Museum of Fine Arts of Budapest. The painting was sold to the famous Parisian art dealer Eugene Kraemer, whose collection was auctioned again in Paris in 1913 (at the Galerie Georges Petit[vi]). In this catalogue, the panel was attributed to Francesco Granacci, with the support of Salomon Reinach (1922)[vii], but then changed to an attribution to Ridolfo in the catalogue of the 14 April 1944 auction at the Kende Galleries in New York[viii]. A pencil note on the copy of the catalogue preserved in the library of the Metropolitan Museum of Art informs us of its selling price, incredible for the time: $2,800 (the highest price of the auction of the Mark Leopold collection), probably indicating that the purchaser of the panel believed it to be a work by Raphael, due to the extraordinary quality of the painting that can be appreciated even today.

Recently, Everett Fahy offered a solution to the matter of the attribution: in 1968, the American scholar suggested the existence of an anonymous master, active in Florence at the beginning of the XVI century and close to Francesco Granacci and Ridolfo del Ghirlandaio[ix]. The painter was called the ‘Master of the Scandicci Lamentation’, as the emblematic work of his production was a panel with the Lamentation on the Dead Christ made for the church of San Bartolomeo in Tuto, in Scandicci (Florence), whose composition was partially drawn from Pietro Perugino’s famous Lamentation, today at the Palatina gallery in Florence[x]. For the first time, in his famous volume Some followers of Domenico Ghirlandaio (his published doctoral dissertation), Fahy listed the oeuvre of this anonymous master, including both our panel and the ‘tondo’ of the Szépmuvészeti Múzeum[xi], previously cited by Giulio Sambon and, on several occasions, by Andor Pigler, as the prototype of the composition[xii]. In addition, Christian vol Holst previously denied the attribution of the Budapest painting to Granacci, suggesting the existence of an anonymous master, Granacci’s alter ego throughout his early activity, to whom, he believed, both panels had to be assigned[xiii]. Hence, the existence of a group of homogeneous works representing a coherent oeuvre was an assumption that was quite supported before Fahy’s remarkable intuition.

It was Fahy’s belief that the Master of the Scandicci Lamentation was a follower of Perugino who, during the first decade of the XVI century, was influenced by the pupils of Domenico Ghirlandaio, amongst all Ridolfo, Domenico’s son. Yet, the oeuvre attributed to our anonymous painter – consisting of around fifteen works – reveals several impressions, from Raphael to the first works of Andrea del Sarto, and outlines a vivid personality that was fully immersed in the various trends of Florentine painting until circa 1515. In addition to the panel in Budapest, our painting can be easily compared with the ‘tondo’ depicting the same subject in the Hermitage Museum in Saint Petersburg, or with the Madonna and Child at the Museum of Fine Arts in Boston. Despite maintaining the smoothness of the shapes of the end of the XV century, the painter is aware not only of the new relationship between figures and space – introduced in Florence with Michelangelo’s famous ‘tondi’ with Pitti and Doni (in this regard, see the Hermitage panel) –, but also of the structure of the different depths of Raphael’s first Madonnas; our painter also draws from Raphael the skilful portraiture displayed in the characters of our panel. The oval faces of our three figures reveal a touching shadow line that evokes the premonition of the Passion, expressed clearly in the unsettled gaze and unstable pose of the Child. The balance of Perugino’s Madonnas, enclosed in their perfect hortus conclusus, is replaced by a type of religious unrest that painters, particularly Florentine painters, appear to understand quite clearly. Even if our painting is the work of a minor artist, it participates as part of the same environment that would soon lead to the first masterpieces of Jacopo Pontormo and Domenico Beccafumi. In our painting, this environment crystalizes an idea of beauty for the last time, one that is already revealing the disturbances of Mannerism.

Our catalogue ends with a new turning point: the decorative finesse of the gold-ground is replaced by the lights of the landscape. Now, light reveals its temperamental quality in connection with shadow, which become sinuous and calligraphic. After the ten fables of the Late Gothic and the rational utopia of the Renaissance, we have reached a melancholic illusion, the real leitmotif of the arts of the XVI century.

[xii] A. Pigler, Országos Színháztörténeti Múzeum és Intézet. A Régi Képtár: katalógusa, Budapest 1954, p. 197, n. 67; Id., Szépmuvészeti Múzeum, Katalog der Galerie Alter Meister, Budapest 1967, n. 67. Also Berenson expressed his opinion on the attribution to Granacci, with the collaboration of the workshop, of the Budapest ‘tondo’: B. Berenson, The Florentine painters of the Renaissance: with an index to their works, New York 1909, p. 144.

An anonymous painter active in Florence at the beginning of the XVI century. He was first identified by Everett Fahy – yet, Christian Von Holst had previously suggested assigning the works attributed to Francesco Granacci to a painter close to Michelangelo’s collaborator. Based on analysis of the altarpiece depicting the Lamentation on the Dead Christ of the church of San Bartolomeo in Tuto in Scandicci (Florence), a partial replica of Pietro Perugino’s Lamentation, previously in the convent of Santa Chiara in Florence and today in the Palatina Gallery at Palazzo Pitti, the scholar gathered a stylistic group of fourteen works and assigned them to an anonymous master named after the aforementioned panel. It was Fahy’s belief that the Master of the Lamentation trained in Perugino’s workshop and was later influenced by students of Domenico Ghirlandaio. In particular, the style of his paintings is close to the manner of the son of Domenico, Ridolfo, and, as previously stated, to the works of Francesco Granacci. Despite having trained in the manner of the XV century, the master adopts new trends thanks to the confrontation with the various formal suggestions he came in contact with in Florence, during the first decade of the new century, including Raphael and Andrea del Sarto. His oeuvre consists mainly of private commissions, painted with a taste that becomes progressively more refined, to meet the new need for pictorial grace and fluency that surfaced in Italian art with the passage to the mature Renaissance.