Venice, View of the Piazzetta towards South, 1780 c. 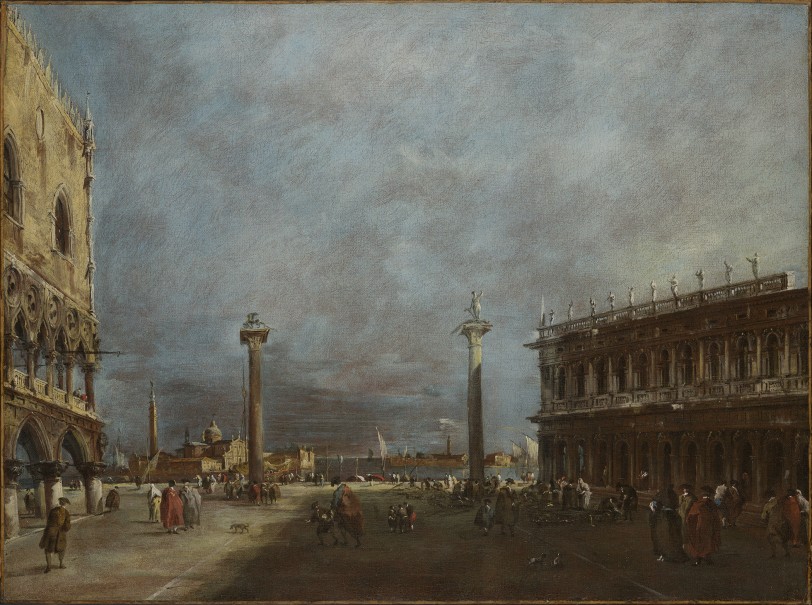 The view of the Piazzetta was a subject revisited by Guardi on numerous occasions through the course of his career, each time varying the perspective and figure arrangements. This view looks south from the Piazzetta towards the island and church of San Giorgio Maggiore and is framed on the left by the Palazzo Ducale and on the right by Jacopo Sansovino’s famous Libreria. The artist has chosen here to depict an autumn day with a storm approaching in the distance, allowing him to display a virtuosic treatment of light, turning the sky into a threatening dark blue and grey animating it with clouds, rendered with marvelous quick brushstrokes. The light comes in from the right casting a long shadow from the Libreria Sansoviniana. The last rays of the sun catch the upper part of St Theodor’s column and bathe the façade and campanile of San Giorgio Maggiore on the far side of the Bacino di San Marco. Most closely resembling the present composition, in terms of the low viewpoint is a canvas in the Wadsworth Atheneum, Hartford Connecticut (see A. Morassi, Guardi, I dipinti, Milan 1993, vol. 1, p. 379, cat. no. 366, reproduced vol. II, fig. 396). The latter is dated by Morassi to Guardi’s maturity around 1770-80 but is depicted during a bright summer’s day.