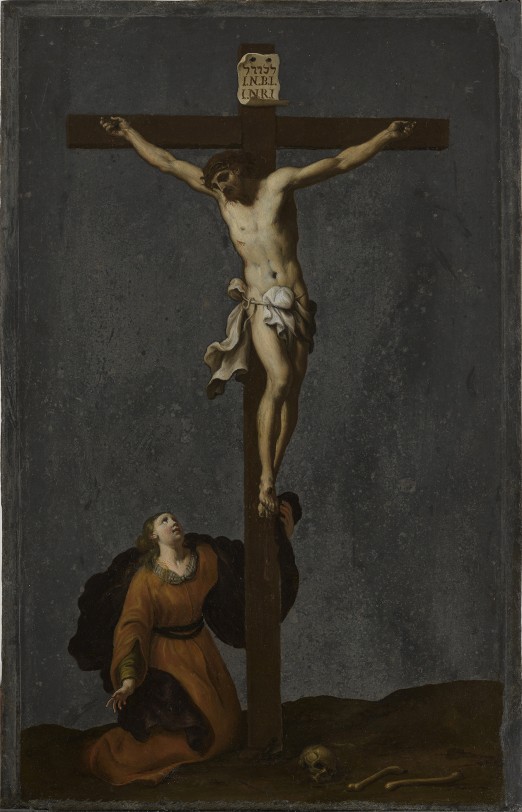 Christ is depicted at his last breath, with the cross standing on the stark ground on which only the rests of a human skeleton are visible. Mary Magdalene is crying at the bottom of the cross and looking at him with a sorrowful gaze.

This oil painting on slate, a technique that became broadly common from the first half of the 16th century. After the very fist incunabula of the 15th century, Sebastiano del Piombo imposed with his formal authority the technique of oil painting on stone[i]. In the debate on the “comparison of the arts” – that is between painting and sculpture which form of art the “connoisseurs” had to prefer – one of the most used arguments in favour of sculpture was the perishability of the materials used for paintings as opposed to the eternity of stones. The need to paint on stones culturally derives from this assumption, and not surprisingly the painter who practiced the most the technique of oil on marble was Giorgio Vasari, the greatest intellectual of the 16th century art essays, the first who became aware of the centrality of history – and therefore of the conservation of artworks as documents – in the development of arts throughout the centuries[ii].

The late 16th and early 17th centuries saw the widespread practice of using slate or touchstone as painting supports in the workshops of the cities of the Republic of Venice. The exploration of mines, such as the slate mine in Val Brembana and the touchstone mines around Brescia, made large quantities of these minerals available at a good price; yet the chromatic quality of the stones was pivotal to the success of this technique since it corresponded to the formal needs of the painters of the Venetian and Lombard schools. Titian’s latest style and the whirlwind luminous contrasts of Tintoretto’s subjects resulted in the development of Venetian painting towards a predominance of dark settings. A quite quicker application of flickering brushstrokes of light was possible thanks to the large usage of a brown imprimitura on the canvases. Painting of slate and touchstone minimized the issue of preparation: hence the presence of a really great number of painted slates in 17th century Venetian collections, mostly listed as artworks of nameless painters, as Linda Borean’s studies state[iii]. It is not that the great masters did not practiced this technique – we know of paintings on slate made by Palma il Giovane, Agostino Carracci and even Van Dyck – but this kind of painting was so successful that its models were often repeated by minor artists to became, as for our Crucifixion, tools of devotion that could be found in any house of the middle class: with the exception of the largest compositions, where more panels had to be weld and therefore an équipe was needed, these artworks were not commissioned, but rather produced for the workshops’ private market.

Our Crucifixion with saint Mary Magdalene follows the many versions of this subject made by Jacopo Negretti better known as Palma il Giovane (Venice, circa 1550– 1628) throughout his long career: we immediately think of the small canvas today part of the Franchetti Gallery at the Ca’ d’Oro in Venice[iv] – where Mary Magdalene is actually closer to Christ than in our painting; in several altarpieces, mostly made for parishes near Venice, the shape of the body of the Redeemer is repeated with few variations, leading as a consequence to a figurative tradition that became quite widespread in the territories of the Serenissima[v]. Palma himself is probably the author of the most famous slate featuring this subject, previously part of the collections of Giacomo Carrara and today part of the collection of the Accademia Carrara in Bergamo[vi]. Nonetheless, if we compare it with our slate we could say that the latter is of a later generation, made by a master who has interpreted the legacy of Titian and Tintoretto, and is already aware of Padovanino’s plastic formal solutions (and Magdalene echoes Padovanino’s massive female figures). A retrospective interpretation of Venetian tradition is present along with a clearly 17th century usage of the shadows that reveals contacts with several regional schools, first of all the Emilian School.

[v] The most famous artwork among the group of Jacopo Palma’s altarpieces with the Crucifixion and the sorroful is the painting today part of the collections of the New York Metropolitan Museum, previously part of Italico Brass’ collection in Venice: F. Zeri, E. Gardner, Italian Paintings. A Catalogue of the Collection of The Metropolitan Museum of Art, II, Venetian School, New York 1973, p. 46, fig. 52.