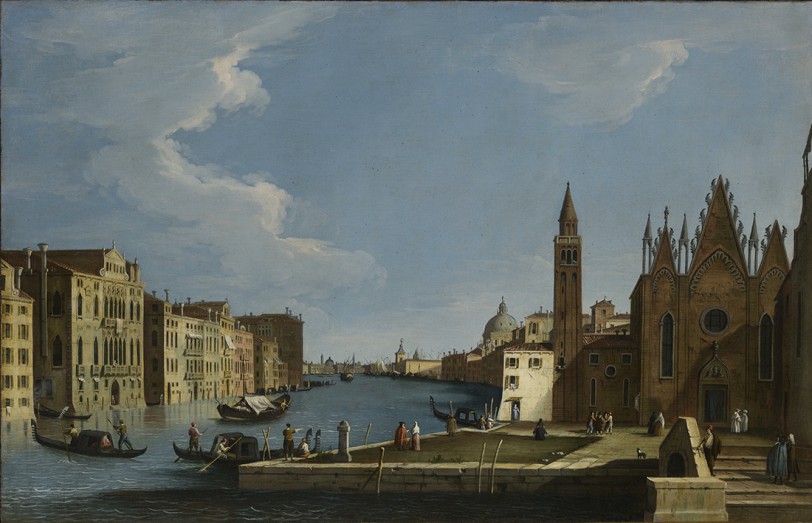 Bernardo Canal has always been known above all as the father of Canaletto, and after that as the eldest member of a studio which for several years included his grandsons Bernardo Bellotto and Pietro Bellotti. A comparison with his celebrated descendants has inevitably been to Canal’s detriment, while his frequent employment of his son's compositions has less fairly resulted in him often being seen as a peripheral figure of little originality. He has never received enough credit for having provided, as far as we know, his famous son's only education in the art of painting. He was already a painter before his son was born in 1697, and was a member of the first generation of Venetian view painters. Although we now know that he was born on 27 September 1673 rather than in 1664 as was generally believed until very recently, he was still only a decade younger than Luca Carlevarijs (born in 1663) and less of Johan Richter (born in 1665), the artist whose style his most resembles (It may also be noted that unlike either of those Bernardo was a native Venetian). No attempt has been made, however, to date any of his work as a view painter earlier than his son's first works in the genre.

Between 1716 and 1718 Canal worked as a scenographer for the Venetian theatres of San Cassiano and Sant'Angelo, with assistance from his sons Antonio (Canaletto) and Cristoforo, for the staging of works by Pollarolo, Chelleri and Vivaldi. This aspect of his activity also took him to Rome in 1719-20, with the young Canaletto, in order to produce sets for Alessandro Scarlatti's Turno Aricino and Tito Sempronio Gracco performed at the Teatro Capranica during Carnival in 1720. It was there that Canaletto is famously - and convincingly - said to have first been inspired to draw his surroundings and to give up working for the theatre. Relatively little is known of Bernardo's career. He was inscribed in the Venetian painters' guild in 1717, 1738 and 1743, and was nominated Prior of the Venetian Collegio dei Pittori in 1739, which would seem to indicate a degree of respect from his peers.

All attributions to Canal are based on a group of five Venetian views, once in the Salom Collection in Venice, which follow engravings by Bernard Vogel after Johan Richter, and which are all signed and dated on the reverse ‘Bernardo Canal Fecit 1734’; those are also the artist's only securely datable works. The attribution of two large views of Rome in the Szépmüvészeti Mùzeum, Budapest, is still contested between Bernardo and his son (C. Beddington in the catalogue of the exhibition Canaletto prima maniera, Fondazione Giorgio Cini, Venice, 18 March - 10 June 2001, pp. 78-81, nos. 28-9, as Canaletto; D. Succi ‘Bernardo Canal y el Canaletto de la "prima maniera"" in the catalogue of the exhibition Canaletto: Una Venecia Imaginaria, Museo Thyssen-Bornemisza, Madrid, 29 May - 2 September 2001, pp. 58-60, figs. 7-8, as Bernardo Canal; D. Succi, 'Bernardo Canal: scenografo y vedutista' in the catalogue of the exhibition Da Canaletto a Zuccarelli: il paesaggio veneto del Settecento, Villa Manin, Passariano (Udine), 8 August - 16 November 2003, pp. 170-2, figs. 144-5, as Bernardo Canal; B.A. Kowalczyk, catalogue of the exhibition Canaletto: Rome, Londres, Venise: Le triomphe de la lumière, Centre de l'Art de l'Hôtel de Caumont, Aix-en-Provence, 6 May - 13 September 2015, pp. 56-7, no. 2, as Bernardo Canal; see also D. Dotti, Bernardo Canal’ in the catalogue of the exhibition Canaletto: Venezia e i suoi Splendori, Casa dei Carraresi, Treviso, 23 October 2008 – 5 April 2009, p. 180). Bernardo's style and palette, dominated by browns, are highly distinctive and usually easy to recognise, and he may now be seen as the author of a not inconsiderable body of work, although there are significant variations of quality and of manner. Some of the finest are subtly coloured and highly translucent, such as the panoramic view of the Bacino di San Marco sold from the estate of Giancarlo Baroni at Sotheby's, New York, 29 January 2013, lot 28, while many are dominated by the russet colour of the ground, such as the pair sold at the same auction house on 22 January 2004, lot 182 (as ‘The Master of the Langmatt Foundation Views') and subsequently by Porro & C., Milan, 21 October 2009, lot 34.

This painting is characteristic of the more colourful and more smoothly painted type of work by Bernardo Canal. It presumably dates from the 1730s, as the composition derives from Canaletto's much smaller (47.9 x 80 cm.) painting of c. 1727-8 then in the collection of Joseph Smith in his palazzo on the Grand Canal, and now in the Royal Collection (W. G. Constable, Canaletto, 1962 (and later editions revised by J.G. Links), I, pl. 42; II, no. 196; M. Clayton, catalogue of the exhibition Canaletto in Venice, The Royal Collection, 2005, pp. 58-61, no. 9, illustrated in colour). That would presumably have been accessible to Bernardo Canal, at least after Smith became his son's agent in c. 1730. Bernardo, however, surely used the engraving after it by Antonio Visentini, plate III in the first edition of his Prospectus Magni Canalis Venetiarum, published in 1735. His painting follows the print rather than the prototype in omitting the shadow of a pinnacle which bisects the façade of the church in the painting, and Bernardo has clearly interpreted the two figures on the peak of the bridge on the right as Carthusian monks rather than women.

He has also set them further back. The variations which Canal has introduced in the figures are particularly extensive and demonstrate his intention to provide a personal contribution.