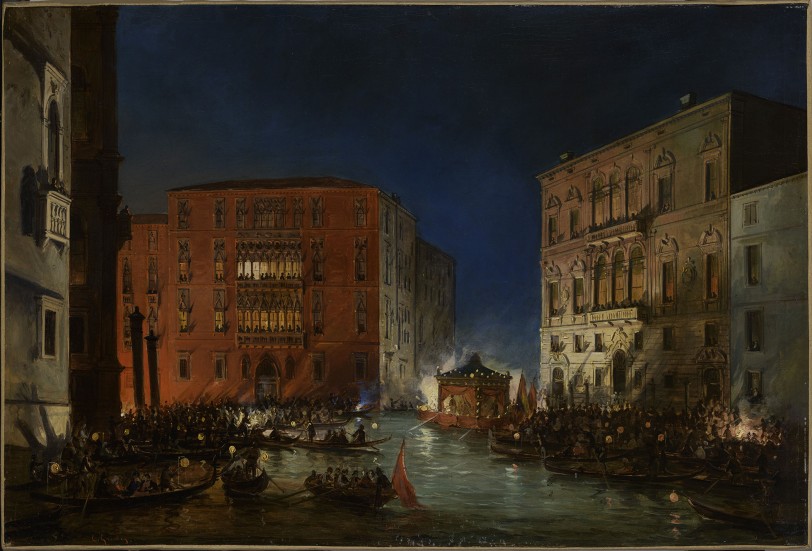 A celebrative night regatta is taking place at the “volta de canal”, where the Rio de Ca' Foscari flows into the Grand Canal: modern vessels are escorting a diplomatic “peota” about to reach the dock of Palazzo Balbi. This traditionally was the finish line of Venetian historical regattas, and the evening atmosphere suggests that this is the regatta that follows on Saturday evening the celebration of the Festa del Redentore.

The origin of this celebration is known: on 4 September 1576, in the major outbreak of the great plague that caused the death of almost a third of Venetian population in just two years, the Senate approved the allocation of a huge sum for the votive construction of a new great basilica on Giudecca, where a small Franciscan monastery had been existing for centuries. Andrea Palladio was commissioned to design the church whose cornerstone was laid the following year in May consecrated to Christ the Redeemer. Once the plague over, the procession took place for the first time on 20 July 1577 on a pontoon bridge from the new basilica to the Fondamenta delle Zattere, passing then through the city to arrive in St Mark’s Square. The Festa del Redentore is celebrated on the Saturday before the third Sunday of July; after the evening mass the regattas on the Grand Canal begin, the most important ending in front of Palazzo Foscari.

At the end of the Serenissima the civic celebrations progressively lose their institutional importance. Nonetheless they continued during the Austrian domination. Besides, in this period Venice started to be considered as a tourist destination – in 1846 the just inaugurated train bridge allowed the arrival by train of the first visitors from the mainland – and the ceremonies featuring 18th century garments naturally attracted a large public. At a certain point the night regatta on the canal, with the fireworks display at its beginning and conclusion, was even more important than the mass of the day: the various 19th century paintings of the vedutisti depicting the parade attest to it[i].

The author of this important canvas is Venetian Giovanni Grubacs (his family was originally from Istria)[ii]: son of Carlo, important vedutista of the first half of the 19th century, Giovanni becomes one of the greatest vedute painters of the second half of the 19th century – that is the final phase of the Risorgimento, Italy’s unification, when Venice is finally united to the Kingdom of Italy. In this period Venice experiences a new subgenre, the “nocturnal view”, inaugurated by a great interpreter such as Ippolito Caffi: the famous 1849 Austrian night bombing on Marghera inspires Caffi for the first important 19th century Venetian view of this kind[iii]. In the 1850s the painter achieves several night vedute, dedicated mainly to civil celebrations whose depiction instils nostalgia for the years of the Serenissima, a feeling that was coherent with the spirit of the Risorgimento[iv].

Giovanni Grubacs is among Caffi's first admirers and, along with his father[v], starts to add to his production of traditional views this kind of new poems, which will remain popular in Venice until the end of the century. The legacy of Francesco Guardi is the starting point of the artist’s reflection on light: being luminosity expressed through really thin strokes – in order to highlight the ever-changing nature of light for which the variations of the glare can be admired in every part of the canvas – the spark is even more seducing when the glare is produced with warm red, ochre and white brushstrokes on a dark background. Between the end of the 1850s and the beginning of the 1860s Grubacs skilfully achieves several paintings of this particular subgenre. His favourite point of view is from the centre of the canal, in front of Ca' Foscari and the outlet of the Rio de Ca' Foscari: as far as this aspect is concerned, our painting can be closely compared to the smaller (35 x 50) canvas auctioned in Venice a fee years ago (fig.1) that depicts the same scene; but also with the 1838 Celebration for the visit of Ferdinand I of Austria (56 x 76,5), auctioned in Wien in 2017[vi]. Our painting stands out for the application of a stronger and denser colour, visibly echoing Caffi's paintings in the definition of the lines and the volumes of the architectures. Contrary to the scene depicted in the 1838 Celebration, in our painting the artist is not recalling an episode of the city's history, he rather wants to present an on-going tradition: the painter is not interested in the past memory of the Serenissima, but rather in the fact that the Venetian citizens of the 19th century based on this very past their feeling of belonging to the city and its monuments. Grubacs is depicting the life of his time, under the protective presence of the palaces of the Renaissance; the lanterns attached to the gondolas, the figures of the oarsmen, the people looking from the balustrades or on the loggias of Palazzo Foscari, all these elements in plain view make us properly understand how this magnificent canvas remarkably attests to Grubacs' attachment and sense of belonging to his city. The artist is depicting the palaces as theatre stages just like a new Marieschi, representing a kind of magnificence that in Venice (and Venice alone) has the shape of everyday life.